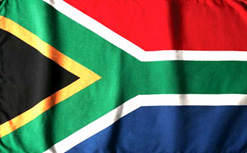 The 2010 Fifa World Cup has hit South Africa, and the country’s striking six-colour national flag is everywhere – wrapped around buildings, on car windows, radio aerials and rear-view mirrors, lining the highways and flying outside homes from suburbs to townships.

So it’s a potent symbol of unity and progress. It’s also the only six-coloured national flag in the world, and one of the youngest. Yet whatever shape it takes – and it’s taken more than any other national symbol – it’s instantly recognisable to South Africans everywhere.

The South African flag has become integrated into butterflies, bow ties, company logos, trees, top hats, hot air balloons, umbrellas, underwear … the list goes on. In this respect, it seems to have no equal.

Brand South Africa has launched the Fly the Flag Fridays campaign, which aims to sustain the spirit of the 2010 Fifa World Cup by asking South Africans to wear the colours of the flag, or the shirt of a national team – Bafana Bafana, the Springboks, or the Proteas – every Friday.

Red on top: how to fly the flag

There are definite rules on how to fly the South African flag, as set out by the government [PDF, 468 KB] and explained by Southern African Vexillological Association.

When displayed horizontally, the black triangle should be to your left and the red band uppermost. If the red band is at the bottom, the flag is flying upside down – the traditional sign of surrender – or if you’re at sea, the international maritime signal of distress!

When draped vertically, a flag should not merely be rotated through 90 degrees, but also reversed. In the case of the South African flag, the black triangle must be uppermost and the red band to your left. (One “reads” a flag like the pages of a book – from top to bottom and from left to right – and after rotation the results should be the same.)

The flag may not be defaced by placing slogans or any writing or design directly on the field of the flag. Any writing should appear next to or underneath the image of the flag. Most of all, the flag must always be treated with dignity and respect.

For full information on how to handle and display the flag correctly, see SouthAfrica.info’s South African Flag Guide.

The making of a flag

South Africans love their flag, both as a symbol of freedom and simply for its colourful and refreshing funkiness. Yet it was originally commissioned as an interim flag only – and was a last-minute job, barely making it onto the country’s flagpoles in time to herald the democratic South Africa.

Choosing a new flag was part of the negotiation process set in motion when Nelson Mandela was released from prison in 1990. When a nationwide public competition was held in 1993, the National Symbols Commission received more than 7 000 designs. Six designs were drawn up and presented to the public and the Negotiating Council – but none elicited enthusiastic support.

A number of design studios were contracted to submit further proposals – again without success – and Parliament went into recess at the end of 1993 without a suitable candidate for the new national flag.

In February 1994, Cyril Ramaphosa and Roelf Meyer, chief negotiators of the African National Congress and the National Party government respectively, were tasked with resolving the flag issue. A final design was adopted on 15 March 1994 – derived from a design developed by South Africa’s former state herald, Fred Brownell.

The proclamation of the new national flag was only published on 20 April 1994 – seven days before the flag was to be inaugurated on the 27th, sparking a frantic last-minute flurry for flag manufacturers.

The South African flag is the symbol of our rainbow nation.

The Fly the Flag Fridays campaign aims to sustain the spirit of the 2010 Fifa World Cup by asking South Africans to wear the colours of the flag, or the shirt of one of our national teams – Bafana Bafana, the Springboks, the Proteas – every Friday.