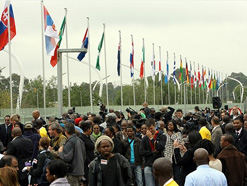 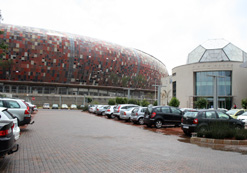 On Thursday South Africans woke to news that all 32 teams for the 2010 Fifa World Cup have now qualified – with Uruguay, the first country to host and win a World Cup, the last to secure their spot, in the early hours of the morning.

The evening of 18 November saw the final six teams qualifying for the tournament, with Greece, Slovenia, Portugal, France, Uruguay and Algeria winning their tickets to South Africa next year.

To mark the occasion, the 2010 Organising Committee hosted ambassadors and embassy representatives from the 32 qualified countries to symbolic flag-raising ceremony on the lawns of Safa House in Johannesburg on Thursday morning. The headquarters of the South African Football Association, Safa House stands a few metres from the flagship Soccer City stadium, where the 2010 World Cup’s opening match and final will be played on 11 June and 11 July 2010.

OC chief executive Danny Jordaan said the ceremony marked the beginning of an important phase in the lead up to 2010.

“As we raise the flag we must understand that the story line has changed. The stadiums will be ready, we can see this. The World Cup is about the teams, the coaches and the fans now,” he said.

“This storyline has changed from the concrete of the stadiums to the people and the emotion of the World Cup. Today is about celebrating Africa’s first World Cup.”

Jordaan encouraged the assembled ambassadors to spread the news of 2010 in their home countries. “You are not only ambassadors for your countries, but now, you are 32 ambassadors of the World Cup. I know the numbers that your teams brought to Germany in 2006 and I will be watching the numbers in 2010!”

Speaking of his country’s tense win over Egypt in Sudan the night before, Algerian ambassador to South Africa Mourad Bencheikh stressed the importance of Africa’s first World Cup.

“Last night was like the second day of independence,” he said “To have this World Cup in South Africa and Africa and to now be part of it is a matter of pride to us.”

Dario Armini, the first secretary in the Italian embassy, was full of praise for South Africa’s preparations. “Italians are definitely starting to feel the spirit of the World Cup Just looking at the stadium here, we can see that things are going well. The fire and the passion of this country is incredible.”

Armini said that while South Africa can expect an influx of fans from Italy during the World Cup, he is also looking to the country’s sizeable Italian community for support.

“We can count on the Italian community in South Africa, which is around 30 000 strong. We definitely saw their passion during the Confederations Cup, but I am sure people will come to South Africa as well, it is such a beautiful country.”

For the New Zealand ambassador to South Africa, Michael Walsh, the mood back home is celebratory.

“There is a euphoric feeling in New Zealand at the moment – it has been 28 years since we last played in a World Cup and I am sure many fans are looking forward to coming to South Africa. The World Cup captures the imagination of all people.”

Walsh is certain of the 2010 tournament’s success. “For 2010, South Africa is obviously pulling out all the stops and you can see from the amazing stadium behind us that it is all on track.”

The 32 teams that have qualified for the 2010 Fifa World Cup are: