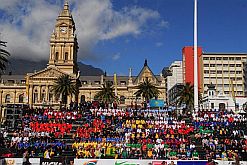 Cape Town was the host city for the
Homeless World Cup in 2006. 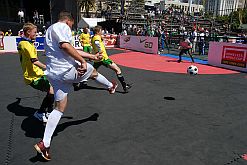 Gerald Bez shoots for goal during the
Homeless World Cup match between SA
and Australia, held at the Grand Parade
in Cape Town, South Africa, in 2006.
(Images: Flickr)

This they do by using soccer as a tool to keep them off the streets and opening them up to opportunities outside their normal environment.

The initiative is part of Oasis: “Reach for your dreams”, which was started in 2000 by director Clifford Martinus and his friends as an informal soccer team for youngsters living in the streets of Cape Town, but grew bigger and was formally registered as a non-profit organisation (NPO) in 2002. Oasis Soccer Club still exists today and takes part in local tournaments.

Established in 2006, the SAHSS became part of a worldwide network known as the Homeless World Cup Foundation, which includes 94 international partner organisations whose goal is to improve the lives of homeless people through soccer.

The foundation is the brainchild of Mel Young, the co-founder of The Big Issue, a weekly magazine sold by homeless people in Scotland. He is also responsible for setting up the International Network of Street Papers (INSP), a global network of street papers sold worldwide.

It was in Cape Town, at the end of the annual INSP conference in 2001, that Young and Austrian Harald Schmied, who is also involved in issues relating to homeless people, came up with the concept of the Homeless World Cup Foundation.

“When we started out it was just to get the youth busy with soccer,” said Martinus.

“Never did we realise that this was the beginning of a way of reaching more people and become a sense of opportunity for others less fortunate than ourselves.”

He added that they are looking to expand their soccer programmes to more provinces and in future host a national street soccer tournament.

Team SA is ranked 20th out of 56 nations involved in the international tournament. This year’s event takes place in Mexico in October and will host a record 72 countries, with 56 taking part in the men’s event and 16 in the women’s.

The tournament started in Graz, Austria in 2003, and has been to four continents.

National teams send different members every year, so as to give as many of their incumbents exposure to travelling and learning about new cultures as possible.

“People tend to think this is just a joyous trip, but for these youngsters, meeting people with similar situations – whether it is drug abuse of being considered anti-social – is an eye-opener,” said Martinus.

“They are boarding a plane for the first time to another country, and when they get there they realise that some of the people they meet are going through the same situation and there is a way out of it.”

Not only for the homeless

Martinus said although it’s named homeless street soccer, it does not include only the homeless and destitute.

“Most of the participants live in places of safety and are from the streets, while others live in informal settlements,” he said.

The team taking part in this year’s event will consist of eight players, four technical staff members and two social workers. It is in need of funds to help cover travelling costs.

Mobile phone company Cell C, which was team sponsor for the 2010 and 2011 competitions, has had to restructure its sponsorship responsibilities this year.

“Unfortunately our funding this year has gone to women and children initiatives and we could not carry on with the sponsorship,” confirmed Mag Pillay, Cell C public relations manager.

The issue is uppermost on Martinus’s mind.

“We need to get funds for flight tickets, the kit and a stipend for the players so they can feel comfortable among their counterparts at the tournament.”

Success stories of the initiative

Ayanda Nqkayi (35) is a former captain of the team. Before joining the initiative he used to sell dagga as a means of survival, but through the SAHSS programme has become involved with the Cape Town Young Men’s Christian Association (YMCA).

Nqkayi participates in YMCA projects such as the After School Programme, where youngsters are motivated to develop their education, confidence, leadership, and social skills in a safe environment.

Martinus said they also recently had the Western Cape Street Soccer finals and called on previous players to facilitate with the proceedings so they can earn some money.

Thulisile Bolana (24) from Khayelitsha is also a member of the SAHSS team. He will be going to Germany in June to a leadership camp organised by the UN Sport for Development and Peace. He is one of only three from Africa who were invited to represent the projects to which they belong and share ideas with others from around the world.

He will be representing Oasis and speaking on how youth from around the world use soccer and sports in general to develop themselves.

Lukhanyo Mdokwa, who was captain of the team in 2010, was taken in as assistant coach for South Africa at last year’s event. While there he was asked by the director of Paris-based Saint-Germain soccer club, who is Brazilian, to assist with the Brazil homeless team.

“Lukhanyo will this year go again as assistant coach if we do get the funds to go to Mexico, but he will not come back to South Africa as he will join the Brazilian team and work at an NGO in Brazil,” said Martinus.