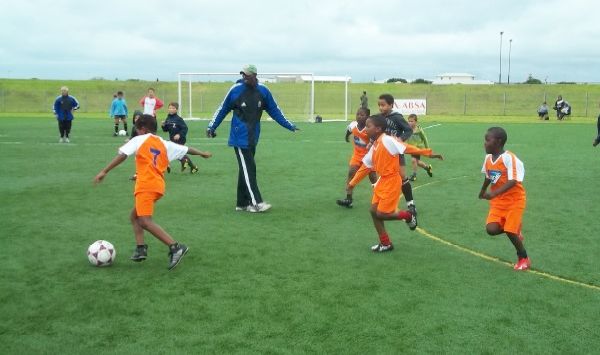 The 2010 Fifa World Cup Legacy Trust has helped a number of football-related community development organisations improve the lives of children across South Africa. They are taught everything from life skills to preventing HIV/Aids. (Image: Football Foundation of South Africa)

At 46, James Shabangu has the physique of a footballer. Except for his pot belly, which grew with age, he still has the wide and powerful shoulders to nudge opponents off the ball, and the muscular legs to carry him for 90 minutes. He has also proven that he still possesses the stamina by running Dona’s Mates Football Development Academy for the past 15 years with unending enthusiasm.

It is this sort of dedication to youth football that the 2010 Fifa World Cup Legacy Trust recognised when it chose the recipients for the first allocation phase of funding in January 2013. Dona’s Mates, Dreamfields and Football Foundation of South Africa were three of the 14 football-related community development organisations that received a portion of R56-million the trust distributed. The funds came from the R450-million that it will disperse over the next decade.

More than a year since they received their share, all three organisations have used their funds to improve the lives of the hundreds of children they serve. The trust had set aside about R5.5-million for health and education development, from which Dona’s Mates received R100 000. According to Shabangu, the academy used the funds to organise workshops, daily programmes and tournaments, and to buy equipment.

Dona’s Mates, based in the impoverished Johannesburg township of Orange Farm, was founded by Shabangu in 1999 as a community-based organisation to develop football talent in the area. “We use football as a tool for the development of life skills and social skills,” he said.

Shabangu had felt the need to serve Orange Farm through the one thing he knew best – football. “I was born and bred in Soweto. But when I moved to Orange Farm in 1992, I played soccer for three clubs there. This was the community that made me. I have lived in Orange Farm ever since and I decided to give back to the community.”

Today, the academy trains 100 children on an Astroturf built by the European Union and GIZ, a German service provider that helps the German government with its goals in international co-operation for sustainable development. The facility is close to three primary schools and one high school. One of the classrooms at Tshepana Primary School is used for workshops.

The workshops include life skills programmes run by youth coaches. The content is taken from the Youth Development Through Football curriculum devised by GIZ. The sessions are instrumental in educating players and coaches about HIV prevention.

Shabangu’s academy has created numerous opportunities for youngsters who want to further their career in football. Many of the players he has coached can now be found playing for clubs in the Safa Second Division. And recently, the academy’s under-19 side participated in a youth tournament in Antalya, Turkey, which included the junior sides of British clubs Manchester United and Chelsea, as well as Santos of Brazil and Benfica of Portugal.

Dreamfields, a not-for-profit organisation (NPO) that provides resources for soccer in some of the most remote and impoverished schools of the country, was included in the trust’s first allocation phase. It received R216 000, most of which went to the development of a primary school DreamLeague in the village of Salubindza in Mpumalanga.

Chief executive John Perlman said the NPO also ran a basic youth coaching course for teachers and school sports assistants, and provided several DreamBags, each of which contained 15 pairs of boots, socks and shin guards; 15 sets of shirts and shorts, and three footballs. The schools are able to choose the colour of their kits and the boots are supplied in the sizes requested.

The trust partnered with the National Lottery to build Salubindza a football pitch made from artificial turf, where the DreamLeague takes place.

Greg Fredericks, the trust’s general manager, said the initiative at Salubindza was in line with Safa’s Technical Master Plan, which aims to teach young footballers the basics of the game through strong league programmes. “Schools football is critical because that is where the net can be thrown as wide as possible. Our most successful codes, rugby and cricket, nurture talent at school. We want to achieve a very strong schools programme with talented footballers playing for their clubs over the weekend.”

DreamLeagues, which started in 2007, has so far invested R34.2-million in school football that focuses on children between the ages of 10 and 12. More than 2 200 schools around the country have been involved in well-organised league matches that are played every week. And, according to the organisation, the quality of football has been improving. “They get better at dribbling and passing, shooting and tackling. More importantly, they learn valuable life lessons, that losing is not disastrous, because the next week and the next game gives you an opportunity to work hard, improve and grow as a player and a team.”

Football Foundation, based in Gaansbaai, Western Cape, received R100 000, which managing director Leán Terblanche said was used to hire two full-time coaches and arrange transport for the children to soccer matches. “Since we are based in Gaansbaai, in Overstrand, which is two hours from Cape Town, we have to transport the kids.”

The money is also being used to identify new talent and organise tournaments. However, the foundation’s most noteworthy project is its HIV education programme, which was implemented with the trust’s funds. Coaches received training on HIV/Aids from Grassroot Soccer, a charitable organisation that uses football to educate communities about HIV prevention.

One of the most important elements of the training, said Terblanche, was the teach-back sessions that allowed coaches to practise lessons in real life scenarios with fellow coaches acting as the children. The statistical information sessions taught coaches how quickly Aids could spread.

After they had completed the training, they visited schools in the region to give lessons on HIV prevention. “It is a 10-week curriculum and the coaches go to the schools to deliver the lessons. It is part of life orientation at schools,” said Terblanche. The coaches also taught their young footballers about HIV prevention during their afternoon training sessions.