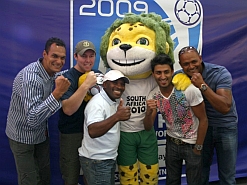 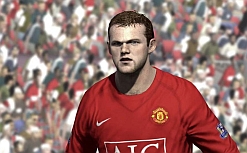 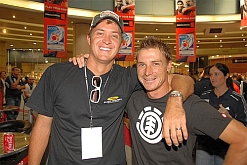 Cricketers Paul Harris and Dale Steyn, who
came along to support the contestants at
the local event. (Image: Shine 2010)

South Africa’s Gordon Butler is one of 32 finalists from 24 countries who will compete for the title of Fifa Interactive World Champion 2009. This year’s tournament takes place on 2 May in Barcelona.

The Fifa Interactive World Cup is the world’s largest football gaming tournament and is the only one officially endorsed by the football body. Now going into its fifth edition, the grand final will be the culmination of seven months of live qualifiers held in 19 countries, among them Poland, Brazil, South Africa, Australia, and current World Cup champion Italy. The remaining 13 spots in the grand final were taken by players competing online on the PlayStation Network.

In total over 500 000 hopefuls took part, playing Electronic Arts (EA) Sports’ Fifa 09 computer game on the Sony PlayStation 3 console. According to the developer, this is the most realistic football simulation yet.

“We believe that Fifa 09 is our best ever football title,” said Matt Bilbey, EA Sports vice president of international marketing. “It is fantastic to see such an overwhelming number of gamers log on to the PlayStation Network and come to qualifying events all over the world in order to play the game and stake their claim to the trophy.”

Fifa executive committee member Chuck Blazer was impressed with the new records of participation set by the 2009 Fifa Interactive World Cup. “I am a keen gamer myself,” he commented, “and I am really looking forward to learning some new tricks from the world’s best virtual football players! I know they practice very hard and, as for every other Fifa tournament, players will have to perform at their best in order to be crowned Fifa Interactive World Champion 2009.”

With the Confederations Cup just weeks away and the whole country abuzz with enthusiasm for the 2010 Fifa World Cup, excitement at the only African qualifier for the Fifa Interactive World Cup was running high.

Held in Johannesburg over three days at the end of March, the event attracted fans from as far afield as Ghana. Local supporters were out in full force to show that they are just as passionate about the virtual form of the Beautiful Game.

Around 500 contestants vied for the title of South African champion, encouraged by Bafana Bafana stars Shaun Bartlett and Andre Arendse, and local football teams Kaizer Chiefs and Orlando Pirates. However, not only footballers were in attendance. Popular boxing champ “Baby Jake” Matlala, as well as cricketers Paul Harris and Dale Steyn, who are both equally adept with a ball albeit a small red one, were also on hand.

In the end there could be only one, and that one was the 31-year-old Butler, also known as Flash. Johannesburg resident Butler had participated in the 2008 event but didn’t make it out of the final group of 128 players. This year, he said, he was determined to improve on his performance. Along the way he triumphed over last year’s national champion Bjorn Diedricks, who put in a determined effort, to no avail.

In the final, Gordon (playing as France) came back from a halftime one-goal deficit to claim victory, with a 3-1 defeat in extra time, over fashion designer Mubeen Gaffoor (playing as Manchester United) from Cape Town. Butler is now in Barcelona where he will compete against 31 of his rivals for top honours.