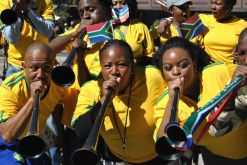 For four weeks in June and July 2010,
South African football fans mingled
and celebrated with thousands of
visitors from around the world.
(Image: MediaClubSouthAfrica.com. For
more free photos, visit the image library)

On 11 June, one year after the kick-off of the first ever Fifa World Cup on African soil, South Africa marks the first anniversary of what many have called the best World Cup ever.

As a result of the death of African National Congress veteran Albertina Sisulu, who was laid to rest in Soweto on Saturday, the 2010 Local Organising Committee (LOC) will mark the tournament’s success at a later time.

LOC boss Danny Jordaan said: “While we acknowledge and welcome the events and celebrations that will take place throughout the country this weekend, as a mark of respect for the funeral of Ma Albertina Sisulu in Orlando this weekend, the 2010 LOC will host a celebratory event around 11 July 2011, a year after the 2010 Fifa World Cup final.”

According to Jordaan, as the country marks the one year anniversary of the successful hosting of the 2010 Fifa World Cup, the LOC looks back with pride at the phenomenal achievement.

“The 2010 Fifa World Cup was a time when South Africa dispelled doubt in its ability and invited the world to witness the reality, rather than believe the perceptions of what they thought South Africa was really about,” Jordaan said.

“Africa’s first Fifa World Cup was Fifa’s best ever, its most commercially successful ever, and arguably its most socially important ever, set as it was in a developing country and continent with so much to prove.

“As we reflect, we do so with great pride in what was achieved by all South Africans, at the legacy of world-class sporting infrastructure, improved transport and road networks, but most importantly at the social cohesion the event generated and the pride felt by South Africans and all Africans as we successfully hosted the biggest event in world sport.”

Jordaan said that while the nation was conscious that the Fifa World Cup was about building a better future for South Africa and showcasing South Africa’s best attributes on a global stage, it was also about acknowledging the country’s past and paying tribute to icons who enabled us to create a country that could even dream of hosting a Fifa World Cup.

“Without icons such as Walter Sisulu, Ma Albertina Sisulu, Nelson Mandela, Archbishop Desmond Tutu, Govan Mbeki, Oliver Tambo and an endless list of people who dedicated their lives for the achievement of a democratic South Africa, an achievement such as a successful Fifa World Cup would simply never have been possible,” he said.

A match between reigning European and world champions Spain and an Africa XI is scheduled to be played at Soccer City on 10 July, in honour of football supporters and the organisers of the tournament.