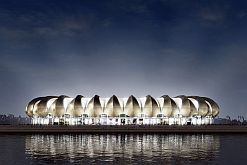 An artist’s view of the spectacular
Nelson Mandela Bay stadium under lights. Danny Jordaan inspects the work
in progress. The LOC boss said he was
delighted with what he saw.

Construction on the stadium is
progressing satisfactorily.

South Africa will take advantage of National Safety Month in February to highlight its readiness to host the 2010 Fifa World Cup. Of particular importance will be the preparations in the Eastern Cape, which will form the centrepiece of the month’s programme.

February is dedicated to matters of safety and security, with related activities taking place around the country. In the Eastern Cape, the emphasis for 2009 will be on community mobilisation in the ongoing fight against crime, and boosting crime-fighting initiatives in the province.

At the time of writing the 2010 Fifa World Cup is just 479 days away and since the Eastern Cape is a host province, it is vitally important that adequate anti-crime measures are firmly in place well before kick-off, in order to guarantee the safety of visitors.

Member of the province’s Executive Council (MEC) for Housing, Safety and Liaison, Thobile Mhlahlo, explained that his department will assess their security preparations for the big event during February, and will address any issues in the months leading up to 11 June 2010.

“It is highly important,” said Mhlahlo, “that when people descend on this province to enjoy World Cup festivities, they feel safe. We will use this month and the remaining period to intensify our efforts of making this province a safe destination for 2010 and beyond.”

The MEC will visit important sites such as the Nelson Mandela Bay stadium itself, the various areas where South African Police Services members will be stationed, and the recently upgraded police stations in Mdantsane, South Africa’s second biggest township.

Mhlahlo will also embark on a series of outreach events to encourage communities to get involved in snuffing out crime. These include debates at schools on strategies to deal with crime, and imbizos, or forums for promoting dialogue and interaction between citizens and government. The imbizos will deal with security issues.

The Eastern Cape’s safety programme will culminate in a Safety and Security 2010 summit to be held in the Nelson Mandela Bay municipality in March.

“Through debate, we will also encourage the youth to come up with solutions they deem appropriate to fight crime. This is crucial because most criminal incidents are perpetrated by young people,” said Mhlahlo.

The Local Organising Committee (LOC) filed a comprehensive security plan with FIFA in June 2008. After careful scrutiny the world football body endorsed the plan, saying it provided a reassuring basis for security at the event.

On course for completion

The Nelson Mandela Bay multipurpose stadium is at an advanced stage of construction, says a new report on the website of the Eastern Cape government. LOC CEO Danny Jordaan visited the site in early February 2009 and was very pleased with what he saw, according to the report.

With its roof more than 50% complete, its pitch fully laid and 40 000 of its 48 000 seats already installed, the stadium is on track to be the first brand-new venue to wrap up construction.

“We are delighted with the progress made with the construction of the Nelson Mandela Bay Stadium,” commented Jordaan. “It is extremely exciting to see a brand new 2010 FIFA World Cup venue taking shape so many months ahead of its FIFA World Cup completion deadline.”

Nelson Mandela Bay’s Deputy Executive Mayor Bicks Ndoni was in complete agreement. “In anticipation of this, we are already scheduling major events and activities to take place here from as early as May. We have already secured a British Lions tour match which will take place on 16 June, Youth Day,” he said.

The 2010 Fifa World Cup will leave a legacy that will remain long after the last vuvuzela has sounded.

A 2008 study by specialist consulting firm Grant Thornton Strategic Solutions revealed that the world’s biggest sporting event would not only contribute R55-billion ($5.5-billion) to South Africa’s economy, but it would attract a cumulative worldwide TV audience of 35-40 billion and, importantly, create 415 000 new jobs.

Tourists to the region will continue to pour through passport control after the tournament, bringing with them a host of opportunities for tourism entrepreneurs. Upgrades to infrastructure, especially transport systems, are benefits that will be enjoyed by all for many years to come.

Another aspect of the long wait comes to an end on 20 February 2009, when roughly three-million tickets go on sale globally, including 15% that are available exclusively to South Africans. However, encourages Jordaan, local football fans should not leave it too late to buy theirs, either on the Fifa website or at any First National Bank branch.

Prices range from R140 ($20) for category 4 (behind the goals or in a corner) tickets to a whopping R6 300 ($900) for a category 1 (alongside the pitch) ticket at the final. For Fifa World Cup ticket purchases the rand-dollar exchange rate has been fixed at R7 to the dollar. The LOC will absorb the cost should the real-time exchange rate rise above this threshold.

While category 4 tickets are only available to South Africans and will only be sold in local currency, the remaining three categories may be purchased by all, including home-grown football supporters.