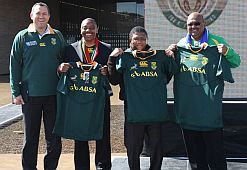 The Ekhaya initiative will ensure that the
country’s athletes have homes away from
home when abroad for international
competitions. 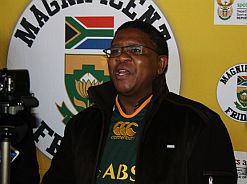 The South African Department of Sports and Recreation recently launched the Ekhaya initiative to ensure that the country’s athletes stay in “homes away from home” when abroad for international competitions.

The campaign is two-pronged: securing hospitality services for athletes and their families is the priority, but the drive has also been designed to enhance South Africa’s reputation as a desirable destination for business investment and tourism.

The International Marketing Council of South Africa (IMC) has partnered with the department to promote Ekhaya and use it to strengthen the country’s brand.

“Ekhaya is a platform … which drives South Africa’s role and position as an emerging market of choice,” said Iggy Sathekge, director of stakeholder relations at the IMC.

“The platform will be used to showcase South African sectors and companies which amplify our support argument for the country as an attractive investment destination,” added Sathekge.

Plans are to implement the campaign during the upcoming Rugby World Cup in New Zealand and the All Africa Games in Mozambique – the next major competitions in which South African teams will participate.

The launch event, held at Freedom Park in Pretoria on 29 July 2011, was also used to reinforce Magnificent Fridays, a countrywide campaign used to drum up support for all the country’s national sport teams.

The campaign is now sharply focused on the Springboks, as the team counts down the days until the Rugby World Cup.

“Wear that jersey every Friday – we want to express to (captain) John Smit that they have the unwavering, unshaken support and that they must play and make us proud,” Mbalula said.

Play your Part firmly behind Springboks

The IMC’s Play your Part initiative is also being used to strengthen the Springbok campaign.

“The IMC has partnered with (the Department of Sports and Recreation) to mobilise support for the Rugby World Cup and the All Africa Games anchored around the Magnificent Fridays campaign. We encourage all South Africans to Play their Part in this regard,” said Sathekge.

“We are encouraging all South Africans to wear sporting gear every Friday during the games to show their support for the national teams,” he added.

Mbalula also unveiled the Andrew Mlangeni jacket at the Ekhaya launch. It’s a green blazer that Mbalula will give to South African sports legends as a token of honour during the 2011 South African Sports Awards.

The jacket of recognition is named after one South Africa’s anti-apartheid icons.

Mlangeni was one of the longest serving political prisoners on Robben Island, spending 26 years there after being found guilty in the Rivonia trial.

Although now a senior citizen, Mlangeni remains active in sport.

“Andrew Mlangeni was an avid golf enthusiast. It has always been his passion, even now in his 80-something years of age, he still plays golf,” said Mbalula.