Young footballers in Ekangala in
Mpumalanga province will find it easier
to improve their game on the new
synthetic surface. 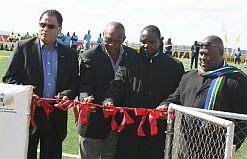 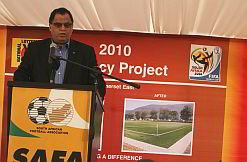 Safa’s deputy president Danny Jordaan
said that such world-class facilites
can be found all around South Africa.
(Images: Bongani Nkosi)

Young footballers in the community of Ekangala in Mpumalanga province will no longer have to hone their skills on dusty, rock-strewn grounds – this is thanks to an initiative of the South African Football Association (Safa), which has established a smooth, first-class synthetic turf in the area.

Safa opened the multimillion-rand Ekangala Stadium on 10 July 2011 to mark the one-year anniversary of the 2010 Fifa World Cup.

Originally planned for the previous month, the festivities were postponed to July in honour of struggle icon Albertina Sisulu, who passed away at the beginning of June.

The facility, with its emerald green artificial turf of Fifa standards, is seen as one of the legacies of last year’s tournament.

Ekangala’s first stadium is one of 52 that Safa is establishing in as many areas in the country. While a few others have already been completed and opened to the public, Safa’s development manager Greg Fredericks said the number will shoot up to 27 by the end of July.

Construction of the outstanding 25 facilities is expected to begin later this year. The National Lottery Board is the main investor in the artificial turfs legacy project, having contributed R170-million (US$25-million), but Fredericks said they are still looking for additional funds.

“We’ll go all out for funding for the other 25 facilities,” Fredericks said during an interview. “The Lotto has agreed to assist, but we are looking for more (businesses) to come on board.”

At least R6.3-million ($931 098) is required for each stadium, Fredericks said, as they entail more than just grandstands and a synthetic turf. They have facilities such as clubhouses, physique development rooms and Safa offices as well.

Artificial turf facilities in Gauteng’s Westonaria and Evaton are among those already complete, others are in Mpumalanga’s Siyabuswa, Upington in the Northern Cape and Somerset East in the Eastern Cape.

“You’ll see that these world-class facilities have been built in the most unlikely places in our country,” said Danny Jordaan, Safa’s deputy president.

Provided more sponsorship comes through, Safa says it may increase the number of legacy project stadiums. “We have to continue with our dream to ensure we reach all of our kids,” said the association’s president Kirsten Nematandani.

Fredericks stressed that the Safa facilities project is separate from the Fifa Football for Hope initiative, which has also resulted in new pitches being laid in parts of South Africa.

The two pitches Fifa built through Football for Hope are suitable for seven-a-side matches, while Safa’s project boasts full-size grounds that can host professional games.

All facilities are targeted at young players in line with Safa’s goal to develop promising footballers in the country. Safa wants to ensure that the Ekangala Stadium is well-used.

“This facility must not be left to isolation and turned into a white elephant,” said Nematandani.

Shadrack Mohlala, president of the Safa-affiliated Kungwini Local Football Association, has outlined plans to manage the new facility so it remains functional at all times.

Placing a facilitator at the Ekangala Stadium to oversee day-to-day activities is part of the strategy.

“We’re going to take responsibility for this facility. We’ll ensure that it’s always clean with the help of the municipality,” said Mohlala.

Safa mandates its regional football associations to manage and maintain the facilities after they become operational.

Mohlala said they will “accommodate everyone in the community”, even programmes involving social development. “The only thing people must do is follow the right procedure”, by making arrangements with the facilitator, he added.

Safa’s facilities project is in response to the lack of development centres in the country’s impoverished areas.

The association wants the artificial turfs to be the training grounds for the country’s future stars. “We’re serious when we say development at grassroots level is the way to go,” Nematandani said.

Safa technical director Serame Letsoaka’s team was at the Ekangala launch to conduct training clinics with the community’s youngsters.

Safa grassroots development projects are meant to ensure that skills lacking in senior national teams “can be enhanced from a very young age”, said Nematandani.

Human Settlements Minister Tokyo Sexwale joined Safa in Ekangala under his role as a member of Fifa’s football development committee.

His department is looking at establishing a housing project on a portion of land opposite the stadium, Sexwale promised the community, so that more people can access the facility.

“We’re prepared to look at a housing project not far from here, so that people can be nearer to this (facility),” said Sexwale. “Where people stay must be where people play …”