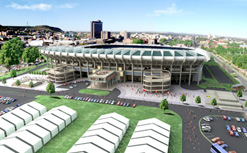 An artist’s impression of the upgraded
Free State Stadium in Bloemfontein, one
of the four 2009 Fifa Confederations Cup
host cities. The other three are
Johannesburg, Rustenburg and Pretoria.
(Image: Mangaung Local Municipaility. For
more free photos, visit the image library.) 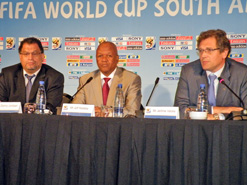 With only 45 days to go before kickoff of the 2009 Fifa Confederations Cup, South Africa’s 2010 Organising Committee (OC) says the country’s stadiums, ticket sales, transport and security are on track for the tournament’s first game on 14 June.

“South Africa is looking to strengthen the understanding that it has the infrastructure, human capacity, technology and broadcast infrastructure to host such major events,” Danny Jordaan, head of the OC, said at the body’s board meeting on 28 April.

Fifa secretary general Jérôme Valcke, who was in South Africa to attend the OC meeting, said that from 1 May ticketing centres would be available to make it easier for South African football fans to buy tickets to this year’s tournament.

“After opening ticketing sales for the Fifa Confederations Cup to the corporate market two months ago we are pleased with the feedback of the local business community,” Valcke said. “We do hope that with the opening of the ticketing centres we will now have a similar positive response of the general public.”

Jordaan added that the ticketing centres, where buying tickets would be both “easy” and “quick”, would help ensure all matches for the tournament were sold out.

“With the launch of the ‘over the counter’ sales in the ticketing centres, we are convinced it will be even easier for our football supporters to obtain tickets,” he said. “By simplifying the process we are certain that South Africans will find it easier to purchase tickets.

“All you need to do is go to the centre, present your identity document for security reasons, and buy your ticket.”

The first ticketing centre opens in Sandton, Johannesburg, on 1 May. Ticketing centres in the other three host cities – Rustenburg, Bloemfontein and Pretoria – will open on 4 May.

Some 320 000 tickets are still available to the public for the tournament’s first match, between South Africa and Asian champions Iraq. The only match to be sold out is that between Italy and Brazil at Loftus Versfeld in Pretoria on 21 June.  Only the most expensive tickets are still available for the final, to be played on 28 June. About 95% of ticket sales have been to South Africans.

Turning to 2010 Fifa World Cup preparations, OC board member and South Africa’s minister of transport, Jeff Radebe, said the new Bus and Rapid Transit (BRT) public transport system is on track, with the route between Soweto and Johannesburg to be in place in time for the Confederations Cup.

During the Confederations Cup, on match-days, additional football trains will operate on 12 identified corridors in Gauteng, with the Ellis Park, Doornfontein, Loftus Versfeld and Rissik Street stations being the key drop-off areas.

The passenger rail agency will provide an additional 18 buses throughout the event to provide alternating services from Johannesburg and Pretoria, to Rustenburg and Bloemfontein on match days.

Supporter safety will also be a priority, with stations staffed until 2am on match days and patrolled by protection services and railway police.

During the Confederations Cup some 8 000 security service members, including the South African Police Services, the army, metro police and emergency services, will be deployed in host cities. More than that, 4 445 stewards and private security guards will patrol the stadiums and their surrounding precincts. Stewards will be professionally accredited in the security industry and are being recruited and trained in all four host cities ahead of the tournament.