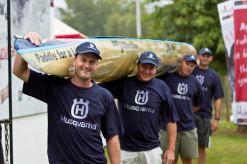 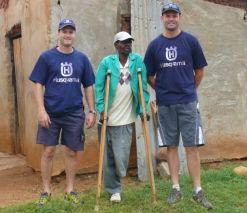 Shane Wright (left) and Craig Gibson
(right) visited Justice Khwela who is
already being assisted through the
initiative. Khwela lost his leg in a
car accident in 1996.
(Images: Tynago Communications)

Four South African paddlers are participating in the Unlimited Dusi Canoe Marathon to raise money for the Paddle for a Limb initiative, which provides prosthetic limbs for underprivileged people living in the Dusi Valley near Durban in KwaZulu- Natal.

The Dusi Canoe Marathon, considered the world’s most prestigious kayak race, takes place every year between Pietermaritzburg and Durban in South Africa and covers a stretch of 120km along the Msunduzi and Umgeni Rivers.

The K4 Dusi 2012 Paddle for a Limb project, sponsored by outdoor power equipment manufacturer Husqvarna, is raising money to provide new prostheses for disabled people, who would otherwise never be able to afford artificial limbs.

Inspired by a need to transform lives and give back to the community, the team – Shane Wright, Craig Wright, Clint Lawson and Craig Gibson – are taking to the water to raise as much money as they can for this worthy cause.

Even the best of paddlers regard the Dusi as one of the world’s toughest canoe events, but these four brave paddlers have added another, virtually impossible, challenge to their race.

They have taken on the gruelling rapids of the 120km route in a K4 four-man kayak. Competing in the race in a K4 vessel is a difficult task as the tight corners and rapids of the Umgeni River aren’t suitable for such canoes.

“We know it is a near impossible task and one heck of a challenge, but we decided to take it on because we feel so strongly about this cause,” says Shane Wright.

Only once before in the history of the Dusi has a K4 finished the race. This is the second boat ever to attempt this feat.

Malcolm Corns, GM of product marketing for Husqvarna South Africa, says that the company recognises the immense challenge faced by the four paddlers.

Craig Wright, one of the four paddlers, runs a prosthetics business in Pietermaritzburg and has undertaken to make and fit the artificial limbs.

The recipients will be selected by Martin Dreyer, a former Dusi champion and head of the sport development initiative Change-A-Life Academy, and the head of the race committee, Cameron Mackenzie.

“Craig is donating his time, so we just need to raise the money for the manufacture of the prosthetic limbs,” says Shane Wright. “We strongly encourage anyone to make a donation, however small.”

So far the team has raised enough money to give prosthetic limbs to three disabled people from the Dusi Valley community, who each lost a leg as a result of either injury or illness.

• For further information on making donations, visit the website.