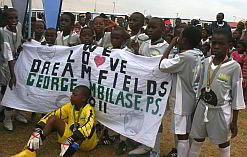 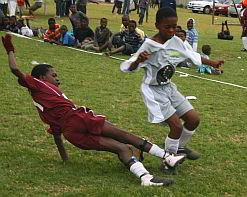 The young footballers came from different
parts of Daveyton to showcase their skills. 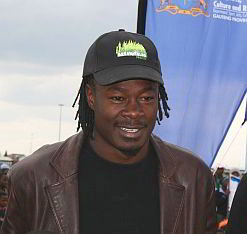 “We love Dreamfields,” reads a banner hoisted by 12 jubilant boys from George Mbilase Primary School in Etwatwa – a township some 45km east of Johannesburg.

The dozen are part of a team of 15 who had just won a one-day football competition on 14 May 2011 at the Kgolagano Primary School.

The hand-crafted banner forms part of George Mbilase youngsters’ celebrations, after winning a highly contested match on penalties against a neighbouring primary school.

A champion’s cup and gold medals added to their pride.

But a more profound explanation for their love for Dreamsfields lies in the new kit they wear – everything a footballer needs, from matching shirts and shorts to boots, ankle guards and socks.

The goalkeeper, who is also the team’s captain, completes his look with a pair of new gloves. He looks like a young Itumeleng Khune, the national team goalkeeper, I think to myself.

These are children who’d usually have to play their beloved sport without any of these basic necessities. Across South Africa’s townships and rural areas one is almost guaranteed to find some future football stars playing barefoot on gravel fields.

The Dreamfields Project, for which the pupils eagerly show their appreciation, is an NGO founded by radio personality John Perlman in 2007. The victorious boys from George Mbilase Primary School are so grateful to Dreamfields because it enables them to play in the kit of champions.

The Gauteng Department of Sports and Recreation has partnered with the NGO to make the kit available to the players. As part of the Etwatwa tournament seven other primary schools from the township received bags of 15 sets football kit worth R7 000 (US$1 000). The much sought-after packs, known as DreamBags, also contain three balls, a kit for the coach and whistles.

“This initiative will encourage children to continue playing football,” said Thulani Zwane, a budding football coach who helps with sports organisation at Thopodi Primary School – one of the beneficiaries. His team won the girls’ final at the Kgologano Primary School event.

Dreamfields encourages pupils to share the kit “so that every child can have an opportunity to play”, said Thabang Ramaboya, a coordination specialist at the NGO.

The contest at Kgolagano was the “start of bigger things to come” in terms of the revival of competitive sports among schools in Gauteng, Ramaboya said.

It marked the launch of a series of inter-school leagues to be played in regions of the province. Ramaboya said the competitions will culminate in provincial finals to be held in August.

An investment of R500 000 ($72 000) from the Gauteng Department of Sports and Recreation is bankrolling the league venture, which will see all participating schools receiving DreamBags.

“Schools near each other will play one another each and every week,” Ramaboya said. “We want to revive sports in schools.”

Former Bafana Bafana midfield sensation Clement Mazibuko, who went to Kgolagano School to watch young footballers from his home town doing their thing, applauded the initiative. “Future football stars used to be identified in schools. That doesn’t happen anymore. This is a way of reviving that,” said Mazibuko.

Since its founding, the Dreamfields Project has criss-crossed the country’s disadvantaged communities to distribute kit and organise competitions. It has given DreamBags to thousands of schools so far.

It has also built about 13 football facilities across the country. The latest field was opened in Tjakastad, Mpumalanga, on the same day Etwatwa’s boys and girls were slugging it out on the field Kgologano Primary School.

But the job is far from done, as Dreamfields’ ultimate goal is to equip each primary school in South Africa with a kit. “There are still many schools looking for bags,” Ramaboya pointed out.

The NGO partners with various other public and private organisations to buy kits and fund other projects.