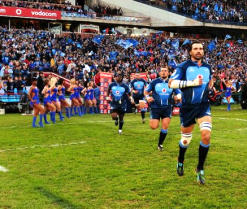 Rugby veteran Victor Matfield is one of several South African sports stars that have pledged their support to the South African Institute for Drug-Free Sport as its official anti-doping ambassadors. Other ambassadors include: rugby stars Bryan Habana and Pierre Spies, and swimming champ Natalie du Toit.
(Image: Gauteng Film Commission)

Doping scandals have rocked the sporting world since the beginning of 2012, from Lance Armstrong in the US to fellow cyclist, South African David George, whose recent suspension by Cycling South Africa made headlines.

South African anti-doping authorities should therefore be excited for the opportunities that will arise from the country hosting the fourth World Anti-Doping Conference in late 2013.

Expected to run from 13 to 15 November at the Sandton Convention Centre in Johannesburg, the event will be held under the auspices of the World Anti-Doping Agency (Wada), after its board chose Johannesburg in 2010.

“We appreciate the work that the South African Institute for Drug-Free Sport (Saids) does in our sport,” he said. “We continue to lead the continent in the implementation and support for anti-doping in sport.”

Wada president John Fahey said the conference will serve as a critical event for the world’s anti-doping community.

“I would again like to thank the Department of Sport and Recreation and the City of Johannesburg for agreeing to host the conference, which is further proof of their commitment to the fight against doping in sport,” he said.

The event has previously been held in Lausanne, Switzerland (1999), Copenhagen in Denmark (2003) and Madrid in Spain (2007), making South Africa the first African host. It is set to attract policy makers, sport administrators and academics in the fields of sports science and management.

Living by the code

Formed in 1999, Wada is an independent agency that oversees measures against doping in a variety of sporting codes. Its key activities include scientific research, education and training, development of anti-doping capacities and monitoring the world anti-doping code, a document that brings together policies opposed to the practise in all sports.

The code is in the process of being reviewed and revised, and a new version is expected to be adopted at the 2013 conference.

“We promote health, fairness and equality for athletes worldwide by working to ensure harmonised, coordinated and effective anti-doping programmes at international level, and at the national level through our stakeholder relationships,” said Fahey.

South Africa is a founder member of Wada, and has an anti-doping laboratory accredited by the world body, in Bloemfontein in the Free State province.

“The sad reality is there is still an enormous amount of work to be done,” said Fahey. “Doping continues to occur, and it changes rapidly.”

He added that there are athletes who are still lured by the glory of winning at all costs and there are members of the entourage still motivated to profit from an athlete’s doping while risking little themselves.

HFL claims that up to one in four supplements purchased at a regular retail shop may be contaminated with trace levels of steroids and/or stimulants like testosterone and methylhexanamine (commonly known as DMMA) as a direct result of inadvertent contamination.

The company launched two programmes called Informed-Choice and Informed-Sport, which ensure supplement certification, in 2007 and 2008 respectively.

“The programmes allow companies to use a logo on packaging to enable athletes to easily spot those products that have been tested for banned substances,” said Dr Catherine Judkins, business sector manager at HFL, adding that such products will have met rigorous certification requirements by HFL’s anti-doping lab.

The doping scandals of 2012

2012 saw one of the biggest doping scandals in the history of world sport, when cycling veteran and seven-time winner of the prestigious Tour de France (TDF), Lance Armstrong, the US Anti-Doping Agency found that there was enough evidence to conclude that Armstrong had participated in a doping programme during his career.

For years Armstrong denied allegations of doping, and continued to enjoy the support of charities and major brands associated with him, until the very recent conclusion of the agency on its findings. In addition to the loss of endorsements and sponsorship, the 41-year-old was also stripped of all his TDF titles and banned from the tournament for life.

Closer to home, David George, former South African Commonwealth Games cycling silver medallist, tested positive in August for the drug Erythropoietin, or EPO, in an out-of-competition test conducted by SAIDS South African Institute for Drug-Free Sport. George was a member of Armstrong’s US Postal Service team from 1999 to the year 2000.

He also lost one of his major sponsors, banking institution Nedbank, which withdrew its support within hours of the news hitting social media networks across the country.

Furthermore, George was provisionally suspended by Cycling South Africa, and would not be able to compete in any of its events, pending the outcome of an independent tribunal on the matter.

Soon after the finish of iconic marathon, winner Ludwick Mamabolo made headlines when both his A and B samples, as per Wada code requirements, tested positive for DMMA. The test was conducted by Saids.

Lephetesang Adoro from Lesotho, who came seventh in the event, was also later reported to have tested positive for a high concentration of testosterone. Both runners will know their fate at the end of independent tribunals on their cases.

Several of South Africa’s most popular sports stars have pledged their support for Saids, and are the organisation’s official anti-doping ambassadors.

Rugby stars Victor Matfield, Bryan Habana and Pierre Spies are three such ambassadors, while Olympic swimmer and Paralympic medallist Natalie du Toit also does her bit for the cause.

Mbalula, who himself is a cycling enthusiast, has also made the pledge.