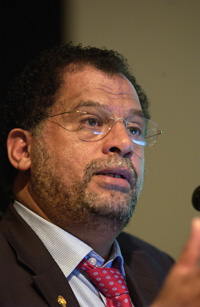 I wish to disagree with those who believe that the Fifa Confederations Cup, scheduled to kick off on 14 June 2009, is not a serious tournament.

While I can understand that some people are making a comparison between it and the 2010 Fifa World Cup, the 2009 Confederations Cup is absolutely crucial for South Africa. It is, after all, the official dress rehearsal for the Fifa World Cup next year, and in so many respects it will set the tone for the global showpiece. In a nutshell, it will test our preparedness and provide valuable pointers in so many areas on the road ahead.

Crucially, it will usher in a vital new culture of football in our country in which we play host to some of the world’s top soccer nations – their teams, officials, supporters and media – while imparting to our own communities the special significance of their respective roles in playing, administrating, supporting and reporting on the beautiful game.

It is not difficult to understand, therefore, the great importance we attach to it, because positive outcomes in the execution of the Fifa Confederations Cup imperatives will instil an immense sense of confidence, both here and abroad, in respect of our progress in putting on the best Fifa World Cup of them all.

In order to do that, however, we must stage the best Fifa Confederations Cup of them all.

And to coin a famous phrase of another soccer-lover, “Yes we can!”

It is good for us to remember that President Barack Obama, who successfully campaigned on those inspirational words for the United States presidency, will be watching the Fifa Confederations Cup with intense interest. His national team is one of the eight competing nations in South Africa next month and the way the tournament is portrayed in the US will be critically examined and projected around the world.

Indeed, the mere fact that this is a tournament involving all six Fifa’s football confederations, as well as the holders of the World Cup and hosts, South Africa, means that the message it sends out will reach right across the globe and be consumed by all those football nations who will ultimately play in next year’s Fifa World Cup.

The best marketing brains like to use the phrase “advertising you cannot buy” – and that’s exactly the promise the Fifa Confederations Cup holds for South Africa.

Permit me to use an example from another sport. Cricket South Africa recently agreed at the shortest notice to stage the Indian Premier League (IPL) – eight teams representing the best players in the world in an event of 59 back-to-back matches.

By all accounts, it was an extraordinary success – providing advertising that South Africa just could not buy.

The IPL in South Africa was not just good for cricket but it did wonders in enhancing South Africa’s credibility as a preferred destination to host blue riband global events of any nature. Apart from the acclaim for it from abroad, the IPL extravaganza re-instilled confidence in all South Africans in respect of our capability to stage and enjoy a great sporting experience – and to extend the red carpet of hospitality to any and every nation.

This then is the promise of the Fifa Confederations Cup in which we have the honour to welcome the top footballers from Italy, Brazil, Spain, Egypt, the United States, Iraq and New Zealand.

By ensuring their comfort, security and enjoyment, we do not just embrace them – we embrace the world.

For South African soccer followers, there is the rare opportunity moreover of seeing many of the world’s great teams and players in action at our home grounds – a year ahead of the Fifa World Cup itself.

This is a gilt-edged opportunity, too, for our own team, Bafana Bafana, to play in this exalted company, test themselves against the best, and for us to cheer them on. What better opportunity can there be for them, for us?

Yes, the Fifa Confederations Cup is not as important as the Fifa World Cup – because nothing in world sport surpasses that marquee attraction – but it is the next best thing by far in the Fifa firmament.

There is a misconception that next month’s tournament cannot provide a true measure of our preparedness for the “main event” because the host cities and venues that will stage the matches of the Fifa Confederations Cup 2009 do not include all those for the Fifa World Cup 2010.

This is simply not so because those Fifa World Cup host cities and stadiums that do not form part of the Fifa Confederations Cup programme are all preparing on one and the same template and will thus enjoy the rare opportunity to closely monitor next month’s operational plan to ensure that they, too, are on track ahead of 2010.

Also all those people working on the Fifa Confederations Cup – think of the thousands of volunteers – will take their hard-earned experience into 2010.

Is next month’s tournament an important one for all of us? You bet it is.