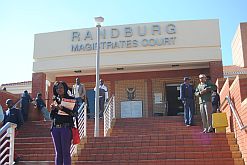 The Randburg Magistrates Court is one of
the 56 special courts. 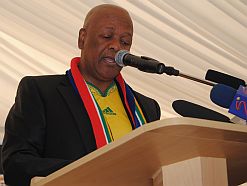 Radebe with his department’s officials and
World Cup bosses. 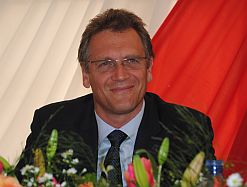 Criminal cases involving 2010 Fifa World Cup visitors will be resolved quickly and efficiently in special courts, which have been primarily set up for the duration of the tournament.

Government has dedicated 56 rooms in district and regional courts in the nine host cities to specifically deal with the cases. The Department of Justice and Constitutional Development unveiled the special courts at the Randburg Magistrates’ Court, one of the selected facilities, in Johannesburg on 3 June.

The set-up is aimed at speeding up prosecutions of foreign nationals who may be caught on the wrong side of South African law. They are also meant to cater for those who may be required as witnesses in court proceedings.

“We have taken out all the stops to ensure that the judiciary … fast-tracks the prosecution of foreign nationals who, wittingly or unwittingly, may be caught up in criminal activities,” said the department’s minister, Jeff Radebe.

The dedicated courts began operating on 28 May and will continue until 25 July, two weeks after the 2010 champions have been crowned. They are open from 7:45am to 11pm seven days a week.

The rooms are in 37 district and 19 regional magistrates’ courts around the country. They are able to handle various criminal cases as well as civil matters involving sums of money less than R100 000. Regional courts hear more serious criminal matters, while less serious cases are dealt with in district courts.

Gauteng, the province that will host the most matches and therefore expecting the most fans, has 21 courts with dedicated magistrates’ rooms – this is far more than in any of the other provinces. The Western Cape and KwaZulu-Natal have four and five dedicated courts respectively.

Kimberley in the Northern Cape is the only non-host city to have two dedicated courts. The Uruguay squad will be based there.

“Justice will be dispensed swiftly and rapidly during the World Cup … without flouting the laws of this country,” said Regional Court President Modibedi Djaje. “We will not cause any unnecessary delay in finalising matters.”

The courts have been beefed up with “skilled and experienced” personnel, including 93 foreign language interpreters. More than 100 local language interpreters are part of the team, which also includes 260 prosecutors from the National Prosecuting Authority and 110 legal aid attorneys of Legal Aid South Africa.

Fifa has already said it will block the entry of well-known stadium hooligans into South Africa, and police will be standby to deal with outbreaks during matches.

Government has put thorough strategies in place to deal with drug-trafficking, human-trafficking, theft, violence, abuse of women and children and all forms of contact crime.

“The police department is fully prepared to attend to any security challenges posed by this tournament,” Radebe said. “The full might of the law will be applied to anyone, irrespective of country of origin …”

But Fifa is hopeful that the World Cup will proceed without much criminal activity. The organisation has already given the thumbs up to South Africa’s security plan. “I hope there will not be too many cases to deal with,” said Fifa secretary-general Jérôme Valcke.

South Africa’s security and judicial efforts are sending a “strong signal to those who try to act against the World Cup”, he added.