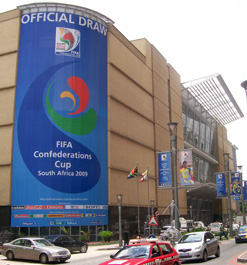 The Sandton Convention Centre decked out
in Confederations Cup banners ahead of the
draw.
(Image: Tamara O’Reilly)

Ask around which major football event South Africa will be hosting soon and the likeliest answer will be the Fifa 2010 World Cup tournament. While that’s not entirely wrong, it’s not entirely true either.

Next year South Africa hosts the 2009 Fifa Confederations Cup – a tournament played by eight teams which comprise the winners of all Fifa competitions held throughout year, the revered World Cup trophy holders and the host nation. This weekend a beady eye was cast on South Africa as the draw deciding the matches that the eight teams will play took place at a glitzy African-themed event at the Sandton Convention Centre in Johannesburg.

Hundreds of delegates and media personnel from around the world witnessed the preliminary draw for the competition, which will be held from 14 to 28 June 2009.

“It would be wrong to regard the Fifa Confederations Cup as merely an entrée to the main course,” says Fifa Secretary General Jerome Valcke. “The eight participating nations represent the cream of their respective continents and the contrast between these teams and their diverse styles should create a fascinating spectacle for the fans. It is shaping up to be an exciting precursor to the 2010 Fifa World Cup.”

From a football point, host South Africa, had the proverbial  luck of the draw as the teams opponents in Group A are Iraq, winners of the 2007 Fifa Asian Cup, OFC Nations Cup holders New Zealand and UEFA Euro Champions Spain.

“It could have been worse. It is in our favour, but we should not underestimate Iraq and New Zealand, who are both competitive teams that have fought hard to be here. The home ground advantage should give us a good chance of getting into the next round. This will lift the spirit of all of us and will be wonderful for the country,” said Danny Jordaan, CEO of the South African Local Organising Committee (SALOC).

As it stands, the draw favours the local team’s chances of gaining entry to the semi-finals – so the longer the South African team stay in the competition, the more matches will be sold out. This will be a relief to the Local Organising Committee who is concerned that matches where only international sides playing will not be well attended.

“There’s a perception that South Africa is a rugby and cricket nation and if we do not fill our stadiums we will only reinforce that stereotype,” says Jordaan. “It will be a wonderful opportunity for the fans to get a taste of a Fifa World Cup atmosphere in the stadiums. We are confident that South Africans will not want to miss this opportunity to see some of the best teams in world and that matches will be sell-outs. And as for the organisation, our stadiums will undoubtedly be ready and the Confederations Cup will give us a great opportunity to test our systems and logistical planning ahead of the Fifa World Cup.”

To get locals into the spirit of things the SALOC has launched a marketing campaign that will be carried across all mediums – radio, television, community broadcasters, print and online.

“It is important to get the message out there now because people are still unaware of the quality of the tournament,” says chief marketing and commercial officer Derek Carstens. “We are a soccer loving nation and we have to prove it to the world that the atmosphere that such a tournament generates internationally is not wasted on South Africans.”

The SALOC has also made tickets to the 2009 Fifa Confederations Cup affordable for locals. Recently with Fifa matches, spectators have to apply either online or with a ticketing partner (in this case First National Bank) to purchase a ticket. According to Fifa, ticket applications submitted will be processed on a first-come first-served basis – in the order of receipt. All successful applicants will be notified of their success within approximately seven to 10 working days after submitting their request.

A maximum of 20 tickets can be purchased and there is no limit on the number of games.

There are two categories of tickets available – individual match tickets and Venue Specific Tickets (VST). Under the VST are two series of tickets – one which allows access to all games played at a particular stadium and another which includes games plus access to the finals. For South Africans they range from R210 to R4 340 and bought from outside South Africa are from US$40 to $620.