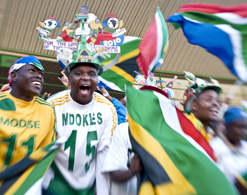 The colourful makarapa – headgear that
starts off humbly as a miner’s helmet,
and is lovingly and completely transformed
into an essential item for the South
African football fan.
(Image: Chris Kirchhoff,
MediaClubSouthAfrica.com. For more free
photos, visit the image library.)

Flying in from Canada to experience African football first-hand, Peter Severinac, from Ontario, was blown away by the electric atmosphere inside the Royal Bafokeng Stadium in Rustenburg on Wednesday evening, when Bafana Bafana took on New Zealand in a 2009 Fifa Confederations Cup match.

Surrounded by thousands of celebrating South African fans, all making their way out of the stadium, Severniac could hardly contain his amazement at what he experienced during the game.

“Those trumpets are great, I have never experienced anything like it,” Severinac said, referring to the air horns (vuvuzelas) that distinguish football matches in South Africa from anywhere else in the world. “Nothing compares to the feeling of being in the stands with all that dancing and noise.

“They treated me like a member of their family when they found out I was from outside South Africa. I will definitely be back next year for the World Cup, and will bring back as many friends as I can,” said Severinac before he was swallowed up by the moving crowd.

“I have been here for six days now watching football, and I really love the friendly people here,” Lenon said. “I must tell you, South Africans are the most friendly and hospitable people I have met.”

Although Spain were playing Iraq in Bloemfontein on the same day, Lenon chose to experience a Bafana Bafana match in Rustenburg instead, having heard from friends that it was a once-in-a-lifetime experience to celebrate football in South Africa.

As tens of thousands of spectators made their way to the Royal Bafokeng Stadium before the game, the city of Rustenburg, in South Africa’s North West province, came alive with the sound of a distinctively African Fifa Confederations Cup.

The drone of vuvuzelas competed with hooting and cheering as fans made their way toward the stadium through the city, hoping for – and getting – a night of celebration as South Africa beat New Zealand 2-0.

Hours before the match had even started, crowds were gathering outside the stadium as music and dancers entertained the excited crowd.

“I am here to support my country, and the vibe around the city is great,” said Lebogang Molefe, adding that the Confederations Cup was all about showing the world what South Africa is all about.

“We are a nation that likes to sing, and we are a happy nation,” Molefe said. “I hope our visitors see this now and on television, and I hope they come back for the 2010 World Cup.”