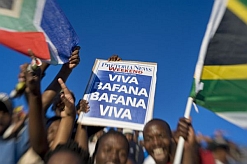 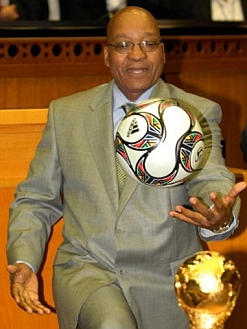 President Jacob Zuma with the Kopanya,
the official ball of the Confederations Cup,
and the coveted trophy. (Image: Fifa) 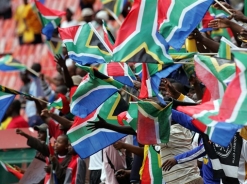 South Africa is ready to stage the 2009 Fifa Confederations Cup. The Fifa 2010 World Cup precursor kicks off on 14 June at Johannesburg’s Ellis Park stadium with a game between Asian champions Iraq and South Africa’s Bafana Bafana.

After a meeting held on 10 June, government’s World Cup inter-ministerial committee declared that all preparations were in readiness for the sporting spectacle, and that fans could look forward to a hugely successful event.

The Confederations Cup will show off a good portion of South Africa’s massive US$98-billion (R787-billion) investment in infrastructure. Much of the money was ploughed into the renovation of eight existing stadiums and the construction of two brand-new venues.

“It gives us comfort to report that all the four venues chosen to host the Confederations Cup tournament are ready,” stated the committee, “namely Ellis Park in Johannesburg, Loftus Versfeld in Tshwane, Free State stadium in Mangaung and Royal Bafokeng in Rustenburg.”

The remaining stadiums are all in advanced stages of construction and would be finished within Fifa target dates.

One of them, the 48 000-seater Nelson Mandela multi-purpose stadium, was officially opened earlier this month, becoming the first of the two newly-built stadiums to reach completion.

The other new stadium, the $109-million (R875-million) Mbombela stadium in Mpumalanga, is scheduled for completion in July 2009.

Support from the fans

An extensive marketing campaign, run by the Local Organising Committee (LOC) and the government, is continuing to build support from communities for both football tournaments.

Although there are still tickets available for the Confederations Cup, the committee noted that sales were brisk and that the opening clash between Bafana Bafana and Iran was almost sold out.

“All signs are there that we are heading for a fully packed 2009 Fifa Confederations Cup, as will the 2010 Fifa World Cup.”

Visitors to the country will enjoy the legendary South African hospitality in a total of 34 910 rooms, over 5 200 of which have been provided by small operators.

The committee said it was pleased with the warm welcome shown to the Italian and Iraqi teams and that it hoped that teams yet to arrive would receive the same enthusiastic greeting.

But the greater part of South African enthusiasm must be reserved for Bafana Bafana, said the committee, adding that all citizens had a responsibility to go out and support their team.

South African president Jacob Zuma, speaking in Parliament earlier in the week, said that the national team’s growing confidence and impressive performances of late, as well as the imminent arrival of the other Confederations Cup teams, was driving the current surge of football fever in South Africa.

According to the security plan submitted to and approved by Fifa, the South African Police Service will assign 41 000 officers specifically to the World Cup. This group is made up of 31 000 permanent officers and 10 000 reservists.

The Confederations Cup will see the deployment of 8 000 officers.

Transport strategies are also ready for the Confederations Cup. A number of technical teams have moved into municipal areas to assist with the rollout of transport projects designed to ease the movement of visitors and fans between stadiums.

Communicating with the world

The International Broadcast Centre at the Nasrec exhibition centre south of Johannesburg will be ready in time for the World Cup. Other communications infrastructure, including the national digital network, is on track.

During the Confederations Cup, members of the media will use a state-of-the-art broadcast centre at Ellis Park stadium.