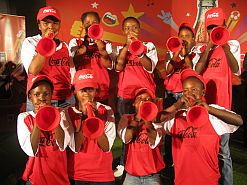 The youngsters from New Nation Primary
School will be part of Coca-Cola’s
flag bearers and ball crew. 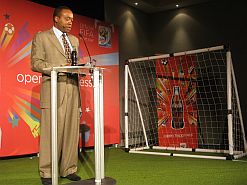 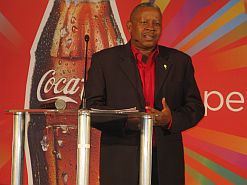 After touring 53 African countries to stir up excitement about the World Cup, the Fifa trophy is headed to its final destination, South Africa, in time for the long-awaited kick-off in June.

The coveted solid-gold cup, last won by Italy in 2006, will arrive in South Africa on 5 May for a whistle-stop journey through about 38 cities and towns across the country’s nine provinces.

Coca-Cola, one of the official 2010 Fifa World Cup sponsors, will lead the tour that starts in the Western Cape on 7 May. At each event authorities will allow up to 800 people to view and photograph the booty.

“This is a unique, once-in-a-lifetime experience as not all South Africans will be able to get tickets to watch matches, but everyone will have an opportunity to participate in the tour,” said Onwell Msomi, Coca-Cola’s general manager of the 2010 project team in South Africa. “Our emphasis is on reaching those South Africans who often miss out on this type of events.”

“[The tour] will unite the nation and generate extra enthusiasm among all South Africans in the last 30 days before the World Cup kicks off,” he said.

The trophy’s 130 000km journey across the continent and the rest of the world will end in Gauteng, the province that will host final World Cup match, early in June in time for the kick off on the 11th .

“We have committed to take the trophy on an epic journey of South Africa,” said Coca-Cola South Africa president William Egbe.

Taking the trophy around South Africa will contribute substantially to the excitement that’s already gripped the country, said former Bafana Bafana player Sipho Ndzuzo. “Everyone will be closer to the trophy and South Africans will then see that they have a role to play in the World Cup,” Ndzuzo added.

“We used to see it on television, now we will see it here in Africa.”

‘Showing the world what Africa is about’

Egbe believes that being prepared for the tournament goes beyond the measure of stadium readiness, it’s also about the continent’s excitement for the tournament. He’s banking on Africa’s flair to make this the best World Cup ever.

“We Africans are known to be exuberant in how we celebrate life, now the world will get a taste of how we celebrate football,” Egbe said. “We’ll guarantee our visitors a warm welcome and excitement in the stadiums.”

Coca-Cola is satisfied with South Africa’s preparations, he added. “The reality is that not only is South Africa ready, it will be ready to make this a spectacular World Cup.

“Football in Africa is an integral part of how we express ourselves,” said Egbe.

Although it will take many years before World Cup comes to Africa again, this year’s tournament should not be seen as the end of a long journey in grooming football stars on the continent, Egbe believes.

It is the “beginning of a much longer journey” in nurturing Africa’s footballers. “There’s no question that the development of soccer at grassroots level is fundamental …” he said.

In this regard the company prides itself in its Copa Coca-Cola Football Stars competition, which has drawn young players from around the world, giving them an opportunity to hone their football skills, build team spirit and develop vital life skills.

The actual Copa Coca-Cola tournament will take place in South Africa before the start of the World Cup. It’s not just about glory, Coca-Cola said, but also “about respecting diversity and forging friendships with players from vastly different backgrounds and cultures”.

“Copa Coca-Cola is something that’s dear to us in terms of youth development,” said Msomi.

Thanks to the beverage giant about 786 South African youngsters will also get hands-on experience in the stadiums during matches as flag bearers and ball crew members. The teenagers, who will have to have some knowledge of the game, will carry the giant national flags of each team and collect balls that are kicked off the pitch.

Mbulelo Mbayimbayi, a 14-year-old from New Nation Primary School in Johannesburg, is thrilled to be one of the flag-bearers. “There will be a large crowd at the stadiums and it will be fun,” he said.

“I would love to carry the flag of my home country, South Africa, or the flag of Brazil because I love Ronaldinho.”