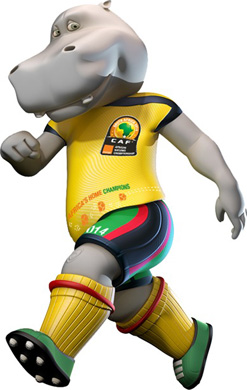 The mascot for the CAF African Nations Championship or Chan 2014 is this hippo dressed as a soccer player. (Image: CAF)

With its sophisticated infrastructure and experience in successfully hosting major international tournaments, South Africa has become the go-to country in Africa for continental and world sporting events. This year, it’s the turn of the CAF African Nations Championship, or Chan 2014, which kicks off in Cape Town on 11 January.

A 16-team competition of African nations, with players drawn exclusively from the different countries’ domestic leagues, the tournament runs from 11 January to 1 February 2014, with matches held in three South African cities. Bafana Bafana will face Mozambique in the opening game at Cape Town Stadium at 18h00 on Saturday.

Miller Matola, chief executive of Brand South Africa, welcomed the 15 other African teams to South Africa. “With games being played in Cape Town, Bloemfontein and Polokwane, visitors to our country will have an opportunity to experience our diversity and the unique quality of the different provinces,” he said. “However, the welcome of our people remains the same throughout the country and all South Africans look forward to hosting our visitors.”

Matola said South Africans had demonstrated their warm hospitality and love of the beautiful game during the 2009 Confederations Cup, 2010 Fifa World Cup, and 2012 African Cup of Nations.

“We are all ambassadors for this country so let us play our part and be good hosts during the Chan tournament.”

During the group stages of Chan 2014, two matches will be played every day from 11 to 22 January.

Group C, made up of Ghana, Congo, Libya and Ethiopia, will play in Bloemfontein in the Free State, and Group D – DRC, Mauritania, Gabon and Burundi – in Polokwane, Limpopo.

The Chan tournament was not originally on Fifa’s calendar as it restricted which players could represent each country. But Fifa has since announced that matches will have full Fifa status, meaning they will count towards country world rankings.

Bafana Bafana’s preparations started with a hiccup as some clubs were reluctant to release their players. This was quickly resolved, and national coach Gordon Igesund has declared himself happy with the preparations.

“The challenge is to get Bafana going to a point that we get into the top eight in Africa, so that we can be seeded when the draw for big tournaments is made,” Igesund said.

“After beating Spain, we should carry on with the habit of winning and [the African Nations Championship] is a type of tournament where it is important for the team to do well.”

Igesund stressed that crowd support will be important to Bafana’s success.

“Nothing is more inspiring to a footballer than having a packed stadium behind him. We face tough opposition, but I am looking forward to winning the tournament.”

Fikile Mbalula, minister of sport and recreation, visited the squad at their base camp in Cape Town on 9 January to wish them well.

“If you go with the mentality that teams have not sent strong players here you are going to be surprised by Mozambique,” he warned. “They will want to come here and embarrass you.

“And you don’t want to appear as people who did not give their all and did not want to represent their country. I thought I needed to emphasise that point that we have pride in you, and we are confident that all of you will make this country of ours proud. Rewards come at the end, not at the beginning.”