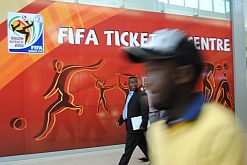 A Ghanaian journalist walks past
the Fifa Ticketing Centre in Maponya Mall. 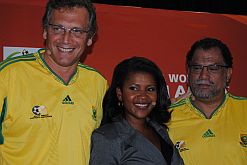 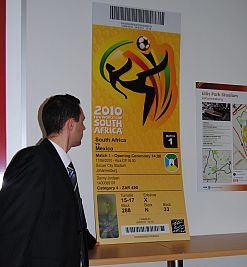 The World Cup ticket has been unveiled to
the media. (Images: Bongani Nkosi)

South African football fans will soon be able to buy tickets for 2010 Fifa World Cup matches over the counter, and collect them immediately.

Fifa and its partner, the Local Organising Committee (LOC), launched the Fifa Ticketing Centres at Maponya Mall in Pimville, Soweto, on 9 April. The official ticket design was also unveiled at the event.

Organisers have set up 11 venues in the nine host cities where fans can buy tickets from 15 April. Johannesburg and Durban have two centres each.

Maponya Mall, Soweto’s first upmarket shopping centre, is home to one of the centres, while Johannesburg’s other centre is at Laico Isle in Sandton.

“We have always said that it is important that we make this World Cup more accessible to the people and with the over-the-counter sales, we believe this measure is consistent with the needs of the fans,” said Danny Jordaan, LOC CEO.

“We are excited about these new initiatives, which make the process much easier for everyone,” he added.

The centres will also serve as collection points for tickets that have already been bought through First National Bank (FNB) branches and other Fifa channels.

The new centres will be of great help to fans who aren’t too familiar with bank transactions and who do not have access to internet, Pimville resident Benjamin Mashiloane pointed out.

He plans to buy tickets for the opening match on 11 June, when South Africa takes on Mexico, but until now has found the ticket application process quite daunting.

“If I give money and I get a ticket on the same day it will be much easier,” said Mashiloane, who stays close to the mall. “Some of the football supporters here in the township are not clued up about the process of money transactions. The centre will be convenient for them.”

To get tickets, all that Mashiloane and fellow fans need now is to show their identity documents, proof of residence and the cash or credit card to buy them. The centres are open seven days a week from 9am 6pm.

About 600 FNB branches across the country, operating five days a week during normal banking hours, will also sell tickets from 15 April. The public can order tickets there and collect them at the 11 Fifa Ticketing Centres or Shoprite and Checkers sales points, of which there are 18 countrywide. “The process is new,” said Fifa.

“We have made a big effort to assist football fans by introducing various additional means to purchase a ticket,” said Fifa secretary general Jérôme Valcke. “We are committed to facilitating the process for all fans and are giving them this last chance to attend the matches and experience the excitement of this first World Cup in Africa.”

With the last sales phase opening on 15 April, Jordaan reinforced the call to South Africans to buy their tickets in time, and not wait for six days until kick-off. All South Africans qualify for the exclusively reserved category-four tickets, which are priced the lowest to enable as many local fans as possible to see matches live.

He said having more South Africans at the matches was part of showing hospitality to the visitors. “The final thing is that South Africans must respond. We must be good hosts, and if we’re good hosts it means we must be there at stadiums.”

Judging by ticket sales so far, stadiums will indeed be packed with South African football fanatics in their colourful self-styled attire and booming vuvuzela trumpets. Out of the 2.2-million tickets that have already been sold, 925 437 have been snapped up from within South Africa.

Only 500 000 tickets are left, although the final, to be played on 11 July at Soccer City in Johannesburg, is already sold out.