Xavier van Stappen is inside his car. 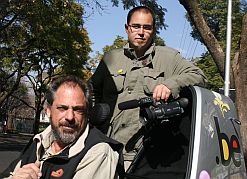 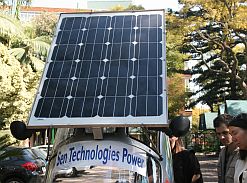 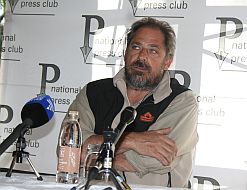 Xavier van Stappen’s rather unconventional model electrical car, which he designed and drove from Europe to Africa before the 2010 Fifa World Cup, is helping raise awareness about alternative forms of energy and environmentally harmful carbon emissions.

The French Belgian, who designed the three-wheel prototype in his home country, crossed 25 countries in Europe and Africa to get to the host nation, South Africa, in time for kick-off on 11 June.

He set off in Copenhagen, in Denmark, and drove for four months to reach Ghana, just days before the tournament began. He then promptly disassembled the vehicle and flew with it to South Africa.

“We flew from Ghana to South Africa just to be on time for the World Cup,” Van Stappen said at a press briefing in Pretoria on 7 July.

During his overland trip he crossed Belgium, The Netherlands, France, Spain, Morocco, Senegal, Burkina Faso and Mauritania, among others.

Travel by road began again in Johannesburg when Van Stappen started his next leg of the journey – this time to Cape Town. The inventor has been travelling with Vincent Pierart, who’s been filming the expedition for a website.

The two-seater vehicle, which Van Stappen always describes as a prototype, is essentially a modified tricycle that’s shaped like a bullet. It relies solely on solar energy to move and can reach speeds of 110km/hour. “But I never drive so fast,” he quipped.

It has a 10-year lifespan and is recyclable, according to Van Stappen.

Van Stappen’s 12 000km journey to South Africa, which he planned to coincide with the World Cup, is promoting the use of “green” technology to create energy and contributing to the global campaign against biodegradation.

“Nowadays we have a problem with petrol. It’s expensive and it produces pollution,” he said.

Using only the sun’s rays to power the vehicle means that it makes no carbon emissions at all. “We have to adopt new ways of producing energy,” Van Stappen said.

He believes that all electrical cars should be three-wheelers, because this keeps them light. Today’s conventional cars “are over-equipped” and consume a lot of energy, he said. Making electrical cars with four wheels defeats the objective of lightness, he adds.

Although the first electrical car was manufactured in 1899, the market remains small. Van Stappen believes mass production will boost the industry and create more options for buyers. “[Consumers] are ready to buy it in many countries … [they] have the power to buy whatever they want.

“During my trip I’ve met many people who are interested in the project.”

Promoting the technology in Africa

Van Stappen’s prototype has been exhibited in all 25 countries it passed through, and is currently on show at the Allandale Business Park in Midrand, Johannesburg.

One of the vehicle’s overriding characteristics is its very basic chassis, which Van Stappen disjointed with students at a technical college in Dakar, Senegal, to demonstrate its simplicity. Because the design is so uncomplicated, the students were later able to rejoin the chassis themselves.

“The aim [of the trip] is also to transfer the technology” to the Southern Hemisphere, Van Stappen said.

His prototype has even made it onto a football pitch at one of the World Cup stadiums.

During his stay here Van Stappen visited a private company in Cape Town, Optimal Energy, which is producing South Africa’s first electrical car, the Joule. He said he was impressed by what he saw.

Production will begin in 2012, either at a plant in Coega or East London – both industrial areas in the Eastern Cape province . The company hopes to have the vehicle ready for sale by 2013.

“It’s great that [South Africa] is a country that’s producing an electrical car for its local market,” Van Stappen said.

The Joule will be a standard four-wheel, five-seater vehicle with a top speed of 135km/h. It will use rechargeable lithium-ion batteries, which are also recyclable.

The South African model will be able to run on solar power as well, so one of the optional extras is to have solar panels installed on its rooftop.

The first of its kind in the country, the Joule was designed by South African-born Keith Helfet, who’s had a successful career as chief stylist at Jaguar.

When not driving or promoting his first three-wheel prototype, Van Stappen works on a second three-wheel car project, the I-CARE 333, which is also biodegradable. He’s hoping that, in time, it will be available on markets across the world.

During his stay in South Africa the Belgian designer visited Volkswagen’s plant in the Eastern Cape, and is now is looking for deals to manufacture I-CARE 333 here.