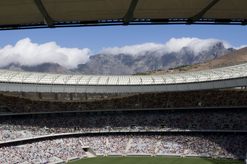 As the world’s best football nations fight through gruelling qualifying campaigns to make it to the 2010 Fifa World Cup, one of the world’s favourite cities is ready to welcome them.

The draw is expected to be broadcast in almost 200 countries and attended by some 2 000 guests and 800 media representatives. It will determine the match order for the world’s top 32 teams who will contest Africa’s first Fifa World Cup from 11 June to 11 July 2010.

The agreement sets out the roles and responsibilities for the two parties in staging the event and providing all the necessary support services.

“We can’t wait for the fourth of December and we can’t wait for 2010 to welcome all the visitors and spectators to our city,” Plato said. “Cape Town is ready and prepared to deliver a memorable final draw and to provide unique visitor experiences for visitors and the soccer fraternity alike.

“The timing coincides with Cape Town’s festive season and all stakeholders are working together on integrated planning and preparations for the event.”

According to a 2008 travel survey taken by more than 25 000 readers of UK papers The Daily and Sunday Telegraph, Cape Town gets the nod for best city in the world, beating the likes of Sydney and San Francisco.

The city has also made it onto National Geographic’s Places of a Lifetime list, which features 50 of the world’s top destinations. Also in 2008, it was voted into third place in the World Edition of the Monopoly board game, coming in ahead of international icons such as Paris, London and New York.

Jordaan said the final draw in South Africa’s scenic Mother City would be a week-long event featuring a number of activities staged by Fifa, the Organising Committee, the City of Cape Town, the Western Cape Provincial Government and all South Africa’s host cities.

“There are two projects left in the delivery of the 2010 Fifa World Cup: the final draw this December and then the tournament itself starting next June,” Jordaan said.

“The final draw in Cape Town is a critical date and an important milestone for us. And we could not find a better city in which to host it. Cape Town’s a wonderful location and its Green Point Stadium is a landmark, one of the best in the world.”

Plato said the World Cup had already created a number of job opportunities in the city, particularly in infrastructure.

“The impetus of expenditure and investment in infrastructure for 2010 could not have come at a better time to counteract the effects of the economic slump,” he said. “While not every individual or suburb of Cape Town will benefit directly from the World Cup, improved facilities, services and infrastructure will benefit all indirectly.”