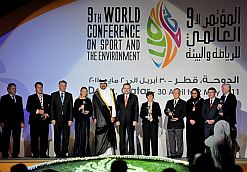 The ninth World Conference on Sport and
the Environment was held in Doha, Qatar,
under the motto, “Playing for a Greener
Future”.
(Image: Olympic.org)

Lorraine Gerrans, programme manager
of the City of Cape Town’s 2010 Green
Goal Programme received the award
on behalf of the city at the conference.
(Image: Icologie)

The city’s Green Goal programme, which ensured that the 2010 World Cup was an eco-friendly event, won the award for its contributions in the areas of sustainable sport and the environment.

Green Goal programme manager Lorraine Gerrans received the award at the IOC’s ninth World Conference on Sport and Environment held in Doha, Qatar, at the end of April.

First introduced in 2009, the awards are given out every two years to candidates nominated by national Olympic committees, international federations or continental associations.

Cape Town was nominated by Fifa. The football organisation’s head of corporate social responsibility Federico Addiechi said: “We are delighted that Cape Town, our nominee to the IOC, received the IOC Sport and Environment Award for their outstanding environmental protection programme.”

At this year’s awards there were 43 hopefuls from five continents, but there could be only one winner from each group.

“Hosting an event such as the 2010 Fifa World Cup that is grounded in the principles of environmental sustainability was an exciting challenge,” said Gerrans, adding that city management’s efforts to efficiently use scarce resources such as energy and water, minimise waste, improve the environment and increase environmental awareness had left a lasting positive legacy for Cape Town.

“Winning this award is testimony to the collaborative efforts of all involved. The principles and lessons learnt from the 2010 Green Goal interventions serve as a baseline for future major events in Cape Town and world-wide,” she said.

The Green Goal programme aimed at environmental sustainability during the 2010 World Cup was a collaborative effort between Cape Town management and the Western Cape provincial government.

In October 2008, the 2010 Green Goal Action Plan was started with 41 projects, after a number of workshops between the City, the Konrad Adenauer Foundation, a German research organisation, the Western Cape provincial government, and NGO Sustainable Energy Africa.

“The 2010 Fifa World Cup showed that Cape Town and South Africa have the capacity to host world-class events,” said Cape Town’s executive mayor Dan Plato. “The IOC award gives international recognition of our collective efforts to ensure that the World Cup in Cape Town was hosted in an environment-friendly manner.”

Plato said that his team is proud of their achievement, and that they saw no reason to prevent any future major events from being sustainably green from start to finish.

“The Green Goal programme has set the bar for event greening in Cape Town, South Africa and the world,” added Plato.

Sports impact on the environment recognised

The ninth World Conference on Sport and the Environment was held under the theme of Playing for a Greener Future, as a partnership between the IOC, Quatar’s National Olympic Committee, and the UN Environment Programme.

At the conference, representatives from the UN, the international sporting fraternity, industry leaders, and NGOs discussed the impact of sport on the environment.

IOC president Jacques Rogge said: “Sport is a powerful tool for positive change and our task is to ensure we use that tool for the benefit of the planet we share. We owe that to ourselves and to the future generations who will inherit this earth.”

He commended the five winners for embracing this concept.