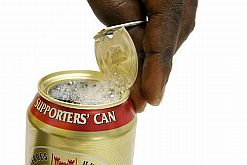 The full-aperture easy-open end allows
people to drink with the ease of a glass.
(Image: One Red Eye/David Perry) 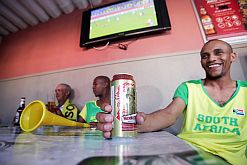 A fan enjoys drinking from the can during
the Fifa World Cup.
(Image: Crowncork.com)

A novel beer vessel introduced in South Africa during the 2010 Fifa World Cup has been named Can of the Year 2010 by The Canmaker magazine, which reports on innovations in the metal-packaging industry.

The Event Can has an easy-open lid that can be fully removed, enabling people to drink out of it as if it were a cup.

It was developed by Crown Holdings in collaboration with brewer SABMiller – especially for the football spectacular.

The award was presented at a gala dinner during The Canmaker Summit in Sao Paulo, Brazil, in November. The product also scooped the Gold Award in the caps and closures category there.

Industry terms explain the can as having a “full-aperture easy-open end”, which indicates the evolution of metal packaging.

Chris Homfray, president of Crown Europe, said: “The full-aperture end is a breakthrough innovation and we are honoured that the technical expertise behind it has been recognised by the industry with the Can of the Year Award.

“It was a challenging project that was made possible by combining two of Crown’s core competencies: the manufacture of food ends and beverage ends.”

Crown Holdings has divisions in North and South Africa, the Asia-Pacific region, Europe and the Middle East.

The can was designed by Crown Bevcan Europe and Middle East, subsidiaries of Crown Holdings, using lightweight SuperEnd technology. This significantly reduces materials costs and makes such beverage holders more environment-friendly than other cans on the market.

The objective was to use the easy-open can ends for a limited edition of Castle Lager, distributed by SABMiller’s South African subsidiary South Africa Breweries, during the Fifa tournament.

Homfray said: “The unique full-aperture end has changed the drinking experience for consumers by turning the can itself into a drinking cup.

“In addition to providing a new way to enjoy beverages at large events, the innovation allows brands to prolong the direct interaction with consumers. These benefits translate into exciting new opportunities to build brand awareness and loyalty,” he added.

The idea for such a can came about in 2008 when SABMiller approached Paris-based Crown Bevcan. After considering various options, the Event Can design was chosen.

“By eliminating the need for pouring drinks into plastic cups, the serving process is also streamlined. This makes the can suitable for use at new locations, such as large events, which is something that was not previously possible,” said Homfray.

Crown was one of three can-makers to win Gold awards at the gala dinner. The other two were Hong Kong-based GM Metal Products and Japan’s Daiwa.

Although the Event Can won, it faced stiff competition from Nestlé’s Nan infant formula can, which is also sold in South Africa.

This product has a specially designed lid which is attached to the plastic scoop, keeping the utensil separate from the powdery contents.

Brazil was chosen as the host of this year’s Canmaker Summit as it’s one of the world’s fastest growing markets for the can-making industry.

At the summit, influential players in the metal-packaging business held presentations, meetings and private discussions about global trends and opportunities offered in Brazil.

The Canmaker magazine’s Can of the Year Awards are a way of celebrating, promoting and rewarding the ground-breaking work taking place in the industry.

“The awards have witnessed the progress this industry has made over the years and they even offer a glimpse into the future,” said Monica Higuera, editor of The Canmaker.

“Every one of the entries becomes part of metal packaging’s own inspirational hall of fame, with the event creating a platform for the world’s can-makers to celebrate their achievements in design and innovation,” she added.

SABMiller has brewing and beverage operations in six countries across South and Central America: Colombia, Ecuador, El Salvador, Honduras, Panama and Peru. In each of these countries it’s the number-one brewer by market share.

SABMiller has also broken into the Argentinian market with its acquisition of Cerveceria Argentina SA Isenbeck, the third largest brewer in that country.

Their regional office is in Bogota, Colombia, and its president in Latin America is Barry Smith. SABMiller became the first international brewer to enter Central America when it acquired Honduran brewer, Cerveceria Hondurena, in 2001. In the same year, the company became the sole brewer and the bottler for the Coca-Cola Company in Honduras and El Salvador. 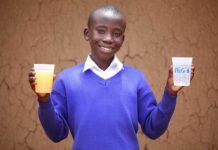 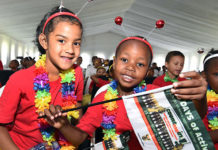 ‘We CAN reduce violence in South Africa’ – Radebe 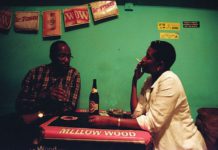 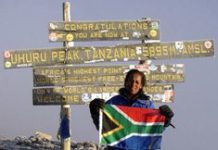