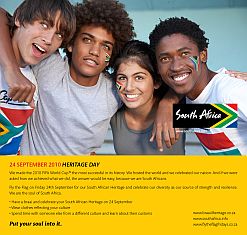 Brand South Africa launched a six-week
legacy campaign on 23 August. One of the
themes of the campaign is Celebrate your
South African heritage 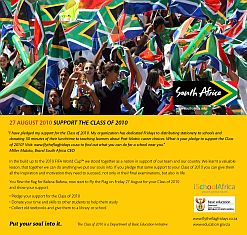 Supporting ‘Class of 2010’ is another
theme that will be celebrated on 27
August. This theme encourages South
Africans to support students preparing
for their final examination
(Images: Brand South Africa)

Brand South Africa launched the Nation Brand ‘Legacy’ campaign, in Johannesburg on 23 August 2010. The campaign aims to align the country’s brand to its unique culture and its people, while also building the brand globally.

Speaking at the launch held at Summer Place in Johannesburg’s northern suburbs, Brand South Africa’s chief marketing officer Lynette Oelschig said, “The success of the World Cup was because of the uniqueness of South Africans. We want to capture what made it work – the soul that made everybody deliver.”

Oelschig said the campaign would centre on the 2010 Fifa World Cup success. “Brand image is based on reputation, on proof of what you can do. We have the World Cup as proof.”

She said the country successfully hosted the global event “because we put our soul into it”. Oelschig added that South Africans need to continue with that mindset with everything they do from now on.

According to Brand South Africa, the plan is to use the World Cup’s success to change South Africa’s past legacy into a progressive view that will define the way its citizens behave, and contribute to the country’s rating internationally.

The legacy campaign will roll out over six weeks with each week focusing on a different theme.

“Each Friday South Africans will celebrate all the things that make us who we are, and the unique values displayed during the World Cup that enable us to be proud of our nation, culture and heritage,” said Brand South Africa’s Sophie Masipa.

Themes include Supporting ‘Class of 2010’, Do something different, Our beautiful country, Do it day, and Celebrate your South African heritage.

Supporting ‘Class of 2010’ is the focus for 27 August. It links to the Department of Education‘s ‘Class of 2010’ initiative, which encourages South Africans to support pupils as they prepare for their final examination.

“We must pledge to help pupils realise how important their education is, but we can also support by helping a scholar to write a study plan, or by assisting with revision,” said Brand South Africa CEO Miller Matola.

Do something different on 3 September challenges South Africans to see things differently and to make a small change in their environment. “Instead of sending an email to your neighbour why don’t you go up and talk to them,” said Masipa. “Celebrate those who have made a difference in your community and join them in making a difference.”

Our beautiful country on 10 September encourages the nation to help preserve the beauty of the country that captivated many World Cup tourists. From hosting a recycling or cleanup day at a school, in the community, or at the office to planting a tree at home or at the community centre, this day is about insuring the country’s beauty for generations to come.

Do it day on 18 September asks everyone to volunteer time, money, and resources to help fellow South Africans who need it.

Celebrate your South African heritage on 24 September, National Heritage Day, focuses on the country’s diversity as a source of strength and resilience. On this day, people can wear traditional outfits that highlight their culture, or spend time learning about a different culture and its customs from a friend or colleague.

“The campaign identifies the factors that make our nation unique, from our sports teams to our children and our renowned South African attitude,” said Matola. “Founded on the South African brand values of Ubuntu, sustainability, possibility, diversity, innovation and creativity, it builds on the successful hosting of the tournament, to which the people of South Africa contributed directly.”

Using the catchphrase “Put your soul into it”, the campaign aims to use the momentum gained during the World Cup to continue to mobilise South Africans to cement the principles of pride and patriotism that they showed when they put their souls into making the World Cup a success.

“We’ve always known we had it in us, now let us celebrate it,” said Matola. ”Put your soul into it.”