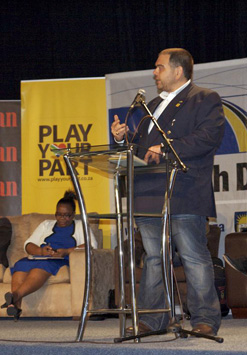 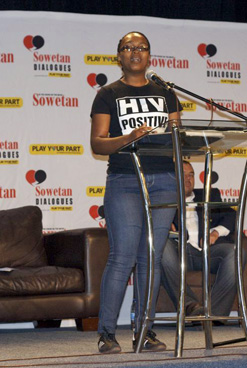 “The problems are not new, they have existed for over a decade and they are fixable if the Department of Health engages with civil society,” said Vuyokazi Matiso of the Treatment Action Campaign and Eastern Cape Health Crisis Action Coalition.
(Images: Keshina Thaver)

The event was sponsored by Brand South Africa’s Play Your Part campaign, in association with the Daily Despatch and Sowetan newspapers.

While it soon became clear that a number of problems, from staff and medical supply shortages to unpaid staff and failing equipment, still needed to be addressed, community members and panellists alike expressed their appreciation that such a dialogue was taking place.

“This is an important opportunity to talk about the things that affect us in the Eastern Cape,” said the province’s Mbengashe. “We have unique issues we have to address, such as the social determinates like access to water and the use of firewood in homes which affect the health of the population.

“I challenge everyone to get the system to work. I am quite willing to work with anyone who has constructive ideas to improve the health system, especially for those without a voice,” Mbengashe said.

Working with the Department of Health

But Mayeko of Rudasa said it was not possible to talk about solutions without addressing the problems first, and a critical step in finding those solutions was for all the health organisations to work together with the Department of Health.

“Doctors need leadership to meet their promises, not just to make them,” Mayeko said. “The harsh treatment of doctors leads to them leaving the province and this means that the people who need them the most are at risk.”

She said the Eastern Cape Health Crisis Action Coalition needed to be listened to because they were able to voice solutions coming from the community. She asked Mbengashe to take note and allow the coalition to help the Department of Health improve health services in the province.

“The problems are not new. They have existed for over a decade and they are fixable if the Department of Health engages with civil society,” said Matiso of the TAC and Eastern Cape Health Crisis Action Coalition.

“My door is always open, but we have to all come together to work on a constructive way forward,” he said.

One of the audience members, Dr Nozipho Jaxa, asked Brand South Africa’s De Kock if he could take positive stories and show the public that even though doctors and nurses worked under stressful conditions, they were still doing incredible work under the circumstances.

“I am very passionate about the Eastern Cape,” Jaxa said. “I was born here and I train doctors all over the province, and I see what wonderful work is being done.”