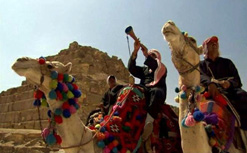 A still from the television advert inviting all
of Africa to rally behind the 2010 Fifa
World Cup.

The International Marketing Council of South Africa (IMC), the custodian of Brand South Africa, has launched a major campaign to spark enthusiasm and unite the country and the continent behind the 2009 Fifa Confederations Cup and 2010 World Cup.

Anchoring the campaign are two stunning new television adverts, one inviting Africa to rally behind the 2010 Fifa World Cup, the other celebrating ordinary South Africans as the “champions” who will make the World Cup a success.

The adverts aim to “drive excitement for a football championship that is going to be colourful, vibrant, intoxicating and alive with a fusion of cultures, dance, song and music,” IMC acting CEO Paul Bannister said in a statement on Monday.

Bannister described the campaign as uniquely South African. “It exudes warmth, is inspirational, involving and makes you feel proud. The campaign is about celebration and solidarity, encapsulating the African and South African spirit of ubuntu.”

A collaboration between the IMC, South African Tourism and the 2010 Local Organising Committee, the campaign was launched at the annual Indaba travel trade show in Durban on Monday.

The partnership seeks to achieve a holistic approach to marketing the World Cup, with a domestic component that celebrates and encourages the active involvement of South Africans in the 2009 and 2010 events.

The TV adverts will be complemented by an online campaign – harnessing the IMC’s South Africa portal www.southafrica.info, the SA Tourism website www.southafrica.net, social networking and mobile sites – to help South Africans get ready to welcome the world in 2009 and 2010.

Monday’s launch at Indaba featured an invitation to South Africans to learn “the diski dance … and to start feeling the excitement that’s growing all over the world for the biggest showcase of capability and hospitality in the history of the country.”

At the same time, it emphasised that South Africa will be hosting the World Cup on behalf of the continent.

“From the onset, we have said that this World Cup does not belong to South Africa alone, but to all of Africa,” said South African Tourism acting CEO Didi Moyle. “In developing a communication campaign specifically targeting this aspect, and communicating in a manner that is widely appreciated, fun and contagious, we are firmly positioning this event and the host continent as alive and vibrant.”

Bannister said it was time for Africans and South Africans to “start to celebrate the 2010 World Cup with passion and enthusiasm. We believe that this campaign will begin to ignite the nation. South Africa is going to generate and have fun.

“If we host this event to the very best of our ability and show the world real South African hospitality, the country and the continent will benefit enormously, and the World Cup will be the springboard that it has always promised to be.

“Ke nako – it really is time for this continent to celebrate and deliver to the world the spectacular party and celebration it’s been waiting for.”

The adverts will flight on various South African television channels from Monday, and launch elsewhere on the continent this week.