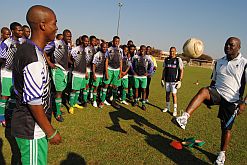 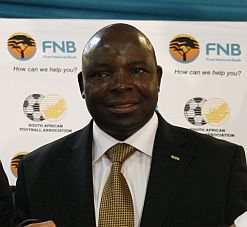 Safa President Kirsten Nematandani is
excited about the new programme and
is confident that it will empower local
coaches with much-needed skills.
(Images: Bongani Nkosi)

The introduction of a new, top-level football-coaching course – which is the first of its kind in South Africa – will see successful participants gaining the highest possible qualification in the country.

Thirty five coaches, some of whom are mentoring in national premier football circles, have already started classes. They were selected from about 60 applicants and will complete the course by mid-July 2011.

“We are proud to be launching this course, as it is in line with the development that we are talking about all the time,” said Safa president Kirsten Nematandani.

“We have been developing players to perform better at the highest level, and in this instance, the coaches get to undergo a comprehensive high-level coaching construct,” he added.

Until recently the highest coaching qualification in South Africa was the Safa Level 2 Coaching Certificate, which is equivalent to the Uefa A coaching licence.

SuperSport United coach Gavin Hunt is the only South African with a direct Uefa A licence. After obtaining it in 2004, Hunt became the most successful football coach in the country with a series of a spectacular wins for his side.

Participants in the new programme include Manqoba Mngqithi who, at age 39, is one of the youngest coaches in the Premier Soccer League (PSL). Mngqithi mentors KwaZulu-Natal side Amazulu – the second team he’s coached in the league since 2007 after helping Golden Arrows win their first Cup in 2009.

The 44-year-old Steve Khompela, who trains Free State Stars, is also in the programme. Khompela has turned a pool of unknown footballers into a formidable team at Stars, and his boys’ theatrics have seen the side trounce champion teams like Kaizer Chiefs and Mamelodi Sundowns in the current 2010/11 PSL season.

National under-23 coach Shakes Mashaba has also enrolled in the programme.

All 35 participants have been involved in football development for many years, with Steven Haupt and Khan well known for their running of academies for promising players.

The Level 3 Pro Licence Coaching qualification will be recognised internationally, according to Safa.

Instructors come from the Confederation of African Football and Fifa. German Horst Kriete, a top Fifa instructor, is also offering his expertise.

“… We want this course to be run by locals in future,” said Michael Nees, director of the Safa Coaching Education Department.

Chiefs boss Kaizer Motaung once criticised South African coaches for not having the capacity to manage top league sides. He said only two local coaches have been able to lead his team and Orlando Pirates to league victory – a comment that didn’t go down well in football circles. He didn’t name those coaches.

The number of foreign coaches in PSL teams has, however, dropped over the years. Of the 16 teams in the league, 10 now have South African coaches.

Durban-born Gordon Igesund, who currently trains Moroka Swallows, holds a record for being the only coach in South African football to lead four different teams to league championship. Igesund won the PSL with Pirates, Santos, Sundowns and the now-defunct Manning Rangers.

Safa has recognised the impact local coaches have had on the quality of the nation’s football. “Clearly our coaches are doing well and a Level 3 course of this nature will enhance the vast knowledge they have for the good of the country,” said Nematandani.