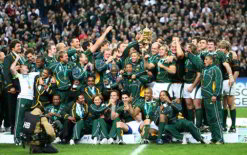 The victorious Springboks in France in
2007. The two-time champions are hoping
for a successful defence of their world
title – with the nation’s support.
(Image: D Noizet / Élysée) 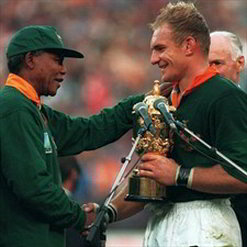 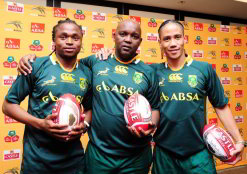 As the countdown begins to the Springboks’ first match in the 2011 Rugby World Cup in New Zealand in September, South Africans have been called on to rally behind their team’s defence of the title – and there are plenty of ways in which to do so.

The Springboks are the current rugby world champions, having lifted the William Webb Ellis cup for the second time in 2007.

Their first triumph came in 1995 during the now-historic tournament held in the newly democratic South Africa. The saga has since been captured on screen in the film Invictus.

The government’s Magnificent Fridays campaign, which aims to unite South Africans behind all of the country’s national sporting teams, calls on citizens to wear their green and gold colours and keep the South African flag flying high every Friday leading up to and during the World Cup.

Sports and Recreation Minister Fikile Mbalula has also urged South Africans to rally behind the national netball team, which will be participating in the World Netball Championships in Singapore from 3 – 10 July.

“Let us do it for the netball team (amaNtombazana) and the Springboks (amaBhokoBhoko) as they go out to conquer the world,” Mbalula said on Tuesday.

Falling in with Magnificent Fridays is the South African Rugby Union’s (Saru) Bokday campaign, which calls on supporters to wear the Springbok colours every Friday through to the end of the tournament in October, as well as on Springboks’ playing days during the group stages of the tournament. These are:

As part of its Unite 2011 campaign, Saru has also launched a specially commissioned anthem, “Let’s Do It Again”, to rally support behind the Springboks.

The song, which will be released to the public in July, is a collaboration between award-winning South African superstars Freshlyground and Goldfish. The ever-popular Freshlyground collaborated with Shakira on “Waka Waka”, the official anthem of the 2010 Fifa World Cup.

“We hope the song becomes the soundtrack to a national mobilisation in the support of the Springboks,” Saru CEO Jurie Roux said in a statement on Wednesday 1 June.

“There are now just 100 days to go until the tournament kicks off, and we believe we can recapture the spirit of national unity that marked the Springboks’ previous Rugby World Cup victories in 1995 and 2007 and also last year’s soccer World Cup.”

The campaign has also set as a target the accumulation of one-million supporters for the Springboks on their Facebook page, as well as providing other digital platforms through which supporters can register their support, while putting themselves in line to win igned playing jerseys or a trip to New Zealand.