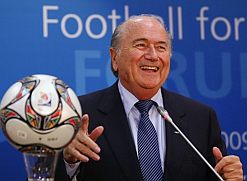 Sepp Blatter sharing an idea with Nelson
Mandela and housing minister Tokyo
Sexwale during one of his many visits
to South Africa. (Image: Fifa) 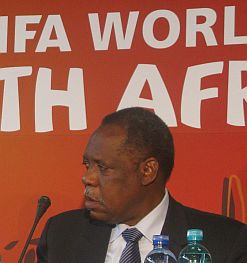 South Africa has honoured Fifa president Sepp Blatter for backing the bid to host the 2010 Football World Cup in Africa, making this year’s edition a first for the continent, and a significant milestone in the history of the tournament.

Blatter was one of the 36 local and international achievers to be given National Orders by President Jacob Zuma on 27 April, Freedom Day in South Africa.

The 74-year-old Blatter was awarded gold in the Order of the Companions of OR Tambo, one of most prestigious of the six categories, which recognises foreigners who have supported South Africa’s aspirations to make a name for itself internationally.

The award also recognises the Fifa president’s “exceptional contribution” to football. He will receive his award at a ceremony in July.

“We will have the opportunity to bestow this prestigious Order on a friend of South Africa, Joseph Sepp Blatter,” Zuma said, “for his outstanding leadership of world football, and his support of our country in hosting the greatest soccer spectacle of all times”.

The eighth Fifa president since its inception in 1904, Blatter is credited for introducing the rotation policy, which gave all six continental confederations a chance to host the World Cup tournament. However, Fifa has decided to scrap the system after 2018.

“When I became president in 1998, my greatest goal was to see the Fifa World Cup played in Africa,” he wrote on the Fifa website on 23 April. “It would never have been possible without our rotation policy.”

Even before his first year as president was up, Blatter called for the rotation policy to give Africa a chance to stage the event. Amid protests from a number of football unions in Europe, Blatter campaigned for months to convince Fifa members to support the policy.

Inspired by Blatter’s confidence in the continent, South Africa made a firm bid for the 2006 Fifa World Cup, but it lost to Germany by a single vote after one Fifa member abstained.

But the country’s spirit was not dampened, as it made another bid, this time successfully, for the 2010 tournament.

Many South Africans, including former president Nelson Mandela, shed tears of joy when Blatter announced in May 2004 that the country would host the 2010 edition. This was the realisation of a dream, both for Africa and Blatter.

“It’s taken a long time, but ultimately it means justice for Africa, and for everything Africa has done for football in the past,” he said.

Swiss-born Blatter has tirelessly defended South Africa’s ability to be a safe, world-class host amid widespread scepticism. His mantra is: “Africa’s time has come” to show the world what it’s capable of. “This Fifa World Cup will be a success,” he has said.

“We have no doubts whatsoever in our ability to organise a secure tournament. Eleven million tourists visit South Africa every year, so why should people stop coming because it’s the World Cup?”

The country has spent billions of rands to prepare for the spectacle, which starts in 41 days. It has revamped its public infrastructure and built many impressive stadiums. The government has repeatedly stated that it’s ready for the crowds that will flock to South Africa between June and July.

Confederation of African Footballpresident Issa Hayatou was also honoured with gold in the Order of the Companions of OR Tambo. Zuma said Hayatou was recognised “for his excellent contribution to the development of African football”.

In the same category, Angolan President José Eduardo dos Santos received gold for his “exceptional” role in the fight against apartheid and the support of liberation movements in Southern Africa.The Order of Ikhamanga, which recognises those who have excelled in the arts, culture, literature, music, journalism and sport, went to local artists Hugh Masekela, Nothembi Mkhwebane, Jonas Gwangwa and Winston Ntshona.