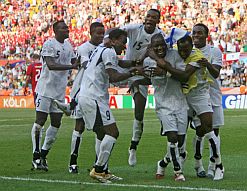 Ghana’s Black Stars are the only team
representing the continent in the quarter
final round of the first 2010 Fifa
World Cup on African soil
(Image: www.souzavto-sts.ru)

Africans are pinning all hopes on Ghana – the only country on the continent to make it through to the quarter-finals of the 2010 Fifa World Cup.

“We are so proud of Ghana, they’ve played really well and have kept Africans’ hopes alive in our first African World Cup,” said Thabiso Malesa from Tembisa, east of Johannesburg.

The team, popularly known as the Black Stars, sent Africans into fits of excitement on Saturday 26 June when striker Asamoah Gyan scored the winning goal three minutes into injury time, defeating the US 2-1.

“In 2006 we made the second round, now we have gone a step further. We have made Ghana proud and the whole of Africa proud. I am the happiest man in the world,” said Gyan.

Samuel Musah, also from Ghana, shares his sentiments: “This is just amazing. These boys have represented this continent with such heart, have made us so proud and given us hope for Africa.”

Musah was one of the 34 976 fans who attended the game at the Royal Bafokeng Stadium in Rustenburg, in South Africa’s North West province. “The energy was fantastic at the stadium. I think our support, singing, screaming, dancing, praying and blowing the African horn motivated the guys. They knew the whole of Africa was behind them and they played their hearts out for their country and the entire continent,” he said.

Speaking after the game, Ghanaian midfielder Andre Ayew said: “We did it for Africa. We knew we had the whole continent behind us and we did not want to disappoint. It gave us more energy to beat the US.”

South Africa, Algeria, Nigeria, Cote d’Ivoire and Cameroon were all eliminated in the first round of the tournament, leaving the Black Stars as the only team in the tournament to represent the continent.

“It’s amazing to have the whole of Africa behind us,” said fellow midfielder Sulley Muntari in a post-match interview with Fifa.com. “Football means so much to Africans. Having the World Cup here is just incredible. It would have been nice if more African sides had reached the last 16, but we’re very proud to carry their hopes.”

Former South African President Thabo Mbeki has congratulated Ghana for advancing to the quarter-finals, saying their victory is a positive indication of Africa’s ability to perform.

He said the team has always been known as Ghana’s Black Stars, but they should consider changing their name to Africa’s Black Stars because they have represented the entire continent and made it proud with their performance.

“I wish Ghana to proceed to the semi-finals and hope the whole continent, not only South Africans, will support the team,” said Mbeki.

The party’s Jackson Mthembu said they are fully behind Ghana. “We are, as the ANC, calling on all South Africans and all people who come from the length and breadth of Africa to be behind the Ghanaians. In fact, they are no longer Ghanaian stars, they are African stars.”

When Ghana first qualified to play in a Fifa World Cup in 2006, the team got through to the second round, before being knocked out by Brazil. They are the third African team to reach the quarter-finals, after Cameroon and Senegal did so in 1990 and 2002 respectively.

Musah says that when Ghana faces two-time World Cup winners Uruguay on Friday 2 July at Soccer City Stadium, “the whole of Africa will be behind the team. I believe their commitment and our support will carry them to the next round”.