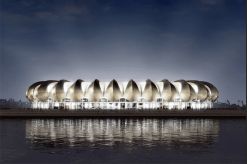 The 2010 Fifa World Cup edged closer to kickoff this weekend as four major teams qualified for the tournament.

This action was capped by the unveiling of the Nelson Mandela Bay Stadium in the Eastern Cape province – the first newly built stadium to be officially opened for the tournament.

“The Netherlands, Japan, Korea Republic and Australia are big teams – on and off the field. Their qualification will begin to shape the great atmosphere we envisage for the event.

“The Dutch, clearly from a football point of view, have some of the most exciting players in the world. And off the field, Dutch fans – dressed in their sea of orange – are synonymous with bringing their special energy to any major event in the world. We’re looking forward to welcoming these exciting teams and their supporters,” he said.

Japan made it into the World Cup by beating Uzbekistan 1-0 in an Asian World Cup qualifying match in Tashkent, Uzbekistan.

“Japan has become a major force in world football. We are delighted that they became the first team to qualify for the World Cup. We want to congratulate the Japan Football Association for making it to South Africa 2010 and we look forward to warmly welcoming the Japanese team and their multitude of fans to our country in June next year,” said Jordaan.

“Japan is an exciting football team to watch. They’ve developed their own unique brand of football, incorporating many contrasting styles and have players with great skill and technical acumen.

“Around 35 000 Japanese fans travelled to the 2006 World Cup in Germany and we are confident that they will travel in similar numbers to South Africa next year and contribute to what should be an electric atmosphere at the tournament,” added Jordaan, who worked as a Fifa general coordinator at Japan’s Niigata and Miyagi Stadiums in 2002 when Japan and Korea hosted the first World Cup in Asia.

Australia’s football team, the Socceroos, qualified for next year’s tournament after a goalless draw against Qatar in Doha.

“After doing extremely well in Germany 2006, the Socceroos have now qualified for back-to-back World Cups and we look forward to welcoming them to our country next year. Australian sporting teams and fans are familiar visitors to South African shores, as our countries have strong sporting links and we regularly host touring Australian rugby and cricket teams. To have the Socceroos here next June for the World Cup will be very special,” said Jordaan.

Australian residents have already successfully applied for 27 139 tickets for the World Cup in the first ticketing sales phase for the tournament.

“We want to warmly congratulate the Korea Republic for making it to South Africa 2010. We all still fondly remember the ‘Red Army’ and the team’s incredible surge to the semifinals of their home World Cup. The team and their fantastic fans will be great additions to the 2010 World Cup,” said Jordaan.

“We at the 2010 Organising Committee have great affinity and similarities with Korea and Japan. Their joint staging of Asia’s first World Cup so successfully raised the profile of Asian football and showcased both the continent’s football and organisational abilities. We are hoping to achieve the same result with Africa’s first World Cup next year and look to Japan and the Korea Republic as inspirations.”

Turning his attention to the new Nelson Mandela Bay Stadium, Jordaan said, “For us the first opening of a newly built World Cup stadium is a huge boost. With the four stadiums about to host the Fifa Confederations Cup ready, this brings to five the number of 2010 Fifa World Cup stadiums now complete.

“The other five new arenas are also shaping up nicely to be ready well ahead of event,” said Jordaan, who attended the stadium’s ‘people’s opening’ attended by 25 000 residents of Port Elizabeth.

The Mandela Bay Stadium can seat 48 000 fans and will host eight World Cup games, including a third and fourth place playoff and a quarterfinal.

The stadium will get its first taste of international competition when the touring British and Irish Lions rugby team play a local Southern Kings Invitational side on 16 June 2009.

“Today’s opening of the stadium is a huge credit to the Nelson Mandela Bay municipality. It’s a tribute to their project management capability, the construction company and the workers that they managed to complete the stadium in record time. It demonstrates the capacity of South Africa’s construction industry and our commitment to deliver on all our World Cup promises,” said Jordaan.

The Nelson Mandela Bay’s deputy executive mayor, councillor Bicks Ndoni, said the public opening gave residents the chance to see first-hand the stadium’s “state-of-the-art facilities, experience its beauty, warmth and uniqueness, and bask in the glory and pride of knowing that we are the joint owners of a truly world-class facility”.