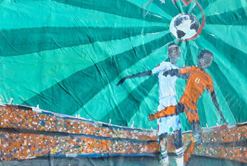 A painting of the Netherlands-Russia game
done at Bassline Club in Johannesburg
during the Uefa European Championship
games in 2008.

Collaborative paintings from 2008 on
display at the Arts on Main complex. 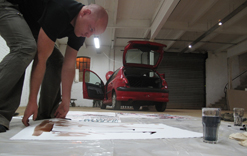 Artist Marcus Neustetter in the grips of a
Confed Cup ink painting in June 2009.

Want to relive the electric atmosphere of the 2009 Fifa Confederations Cup? You can if you visit the Arts on Main arts hub in downtown Johannesburg, where all the emotion of this year’s tournament has been uniquely captured in a series of ink paintings.

The A1-size creations are the work of South African artist Marcus Neustetter and Austrian counterpart Walter Stach, who are no newcomers to the marriage of art and football.

Brought together by the Austrian embassy, the artists met each other in 2008 and began working on football paintings for the Uefa European Championship games with a host of other artists. Building on that success, they set about creating works for the Confed Cup.

“We laid paper out on the floor and opened the boot of the car parked nearby to hear the soccer matches broadcast in Zulu over the radio,” said Neustetter, explaining the set-up at Arts on Main before the Confed Cup painting began.

“Although neither of us understood a word of Zulu we began to ‘speak’ to each other through the painting – inspired by the sound and feeling of Zulu. The atmosphere of the game was driving us. Like on the field, we ‘passed the ball’ over a piece of paper. It was an abstract thing but it connected us as artists. We began having a conversation on paper.”

This work proved fruitful for conceptualising what kind of “football art” will be on offer during the 2010 Fifa World Cup.

The Confed Cup paintings “were very important as they helped us dream about what we can do next year. We want to do something where artists and sports people can play and paint against each other. We want to see how we can influence people who support sport, to also support art.”

The birth of football art

The Uefa European Championship games, hosted by Austria and Switzerland, were the starting point of football art, as the Austrian embassy in South Africa wanted to use the tournament to fuse sport and art. Neustetter and Stach came up with the idea that art would be created as the football games were played out in real time.

With Austria playing host to the games, the country wanted to start cooperating with South Africa, which would later be a host nation itself, on football-related themes.

The football artworks were created during public viewings of the Uefa matches at Bassline Club, a live performance venue in Johannesburg. Seventeen South African artists participated in the process.

Armed with paint, brushes and steel board, the artists worked in pairs during each of the major games “playing” against each other on the same surface. At the start of the match, rules were negotiated between the artists to determine how they would draw or paint in reaction to the game.

The process resulted in seven vibrant artworks of 2.5m by 1.2m, which are now displayed outside the Arts on Main complex. They will remain on display until 2010.

“We mostly chose these artists for their interest in painting, drawing and working on the same surface as someone else, known as collaborating.”

Neustetter goes on to explain the concept of collaborative art, “This is when two or more artists work together on the same artwork. All artists make the same contribution – they all bring their own skills and experience to the artwork – but the artwork forms one unit and the viewer can’t identify which section is done by which artist. This gives the work its own identity.

“This kind of work stimulates the idea of what it is to be an artist. It’s a bit like a soccer game. One person doesn’t do all the work. Teamwork makes the game.

“Like in sport, when you’re collaborating there can be some interference and accidents happen. New lines and marks are created that weren’t intended to be there. There are always variables to consider while exploring a space,” he adds.

“Collaborative art and sport is all about interacting with others and dealing with rules to achieve a certain goal.”

“Look at how people will sit and watch a soccer game for 90 minutes but won’t spend more than two minutes looking at an artwork. Through our collaborative projects we aim to open up the minds of artists and audiences so art can become as exciting as the game … and hopefully we can develop arts awareness so we can get the same kind of sponsorship for it that sport is getting at the moment.”

Do you have any queries or comments about this article? Email Nicky Rehbock at nickyr@mediaclubsouthafrica.com