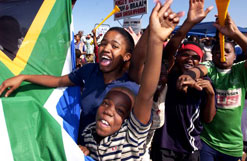 Cape Town is to be the home base for
the BBC during the 2010 FIfa World Cup.
(Image: MediaClubSouthAfrica.com. For
more free photos, visit the image library)

The BBC is planning to spend around £1-million (R11-million) on building a brand new broadcast studio in Cape Town, and will use it as its base for the duration of the 2010 Fifa World Cup.

Despite most media companies’ decision to be based in Johannesburg, the main transmission hub for the tournament, the UK broadcaster has opted for the Mother City, some 1 600km to the south.

Eight of the 64 matches will be played at the magnificent Cape Town stadium, although the English team is guaranteed only one game there when it faces off against Algeria on 18 June. But there’s a good chance the team will be back for a semi-final.

Most media, including BBC rival ITV, will be headquartered at the state-of-the-art International Broadcast Centre, situated next to the recently completed Soccer City stadium in Soweto. This is also just 75km from the English team’s base in Rustenburg, North West province.

The centre will accommodate thousands of media professionals and will feature the most advanced technology when it opens its doors. In terms of telecommunications infrastructure, it will set the standard for Africa.

The BBC has declined to hire a studio at this cutting-edge broadcast facility. UK newspaper Daily Mail reports that, with the help of the Cape Film Commission, the corporation has secured space on the roof of the six-storey Somerset Hospital in Green Point, just a few hundred metres away from the new Cape Town stadium.

Here it will set up a pentagonal glass-walled studio. Construction is reported to be already underway.

From this vantage point reporters will have spectacular views of Table Mountain, World Heritage site Robben Island and the football venue.

The cost of the studio, extra fees for satellite transmission from Cape Town, and the rights to use the hospital’s roof space is together expected to total around R11-million.

Reports say that one of the reasons for the decision is because Cape Town is more attractive visually and will provide a better backdrop for presenters than the stark Johannesburg skyline. But Cape Town’s notoriously rainy and foggy winter weather may have the last say.

In February the BBC came under fire because of lavish spending, deemed by the National Audit Office to be unnecessary and poor value for money. The Parliamentary committee for public accounts also got a word in, criticising the media corporation for its “casual approach to spending licence payers’ money”.

Among other cases investigated, the BBC splurged on a £250 000 (R2.8-million) studio in Vienna for coverage of the Euro 2008 football tournament – because the background view from the original studio in Vienna’s own International Broadcasting Centre was not picturesque enough.

The Cape Town announcement has drawn mixed reactions, with some echoing the sentiments of the National Audit Office, while others feel the BBC should do whatever it takes to make the World Cup experience of its audience of 200-million a memorable one.

One of the reporters who will soon find himself cocooned in the new-age studio is former England striker Gary Lineker, now a sports presenter for the BBC. Lineker is renowned for never having received a yellow card once during his professional career and holds the record for the most goals scored by an England player in a World Cup, 10 in total.

He will be accompanied by the likes of Alan Shearer, also a retired England striker, and Scottish footballer Alan Hansen, capped 26 times for his country.

Some 280 BBC staff will fly to South Africa for the World Cup, slightly down from the complement of 336 who visited Germany in 2006. They will broadcast 32 games live for television, radio and news, and show highlights of all the others from the new studio.

A note on the blog of BBC’s executive football producer Phil Bigwood said that once the World Cup is over the studio will be packed up and shipped off for potential use at other events around the world.

“Our production set-up in Cape Town will be our biggest to date, taking into account previous football World Cups. We are extremely fortunate to have been able to base ourselves here in Cape Town,” said Bigwood.