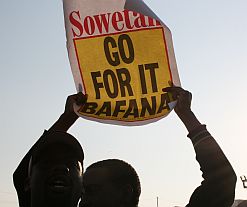 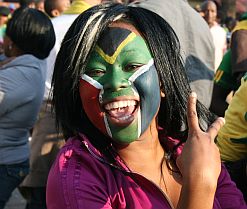 This hopeful woman painted her face with
the colours of the national flag. 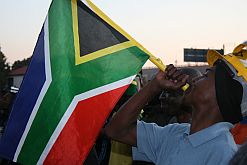 The national flag and vuvuzela are still
the pride of South Africa
(Images: Bongani Nkosi) 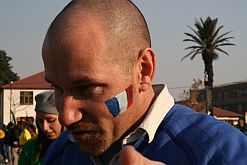 Bafana Bafana might have bowed out of the 2010 Fifa World Cup, but South Africa’s support for the tournament remains intact – thanks to a spectacular final performance by the national team.

The South African football squad performed gallantly to beat European giants and former champions France by two goals to one in Bloemfontein on 22 June. For the first time in World Cup history, the team amassed four points in the initial group stages.

This was not enough to see them through to the next round.  Mexico, who lost their last group match 0-1 to Uruguay, finished on the same number of points but conceded fewer goals than the 83rd ranked South Africans. This gave the Mexicans the advantage and they went through, along with Uruguay.

Local supporters watched the match against France with great enthusiasm, hoping that their beloved boys would score a record number of goals to thwart Mexico’s push to the round of 16. The nation was gripped by euphoria when Bafana scored their first goal. The second goal, scored by striker Katlego Mphela in the 37th minute, sent them into raptures and raised hopes dramatically.

That hope was sustained right until the last whistle. Disappointment, and contrasting excitement, was written on every face.

Music and dance in the public viewing area in Newtown’s Mary Fitzgerald Square, where I was, did not stop at the end of the game. The vuvuzela blared with its unique thunderous sound.  South Africans that I spoke to acknowledged that their nation’s pride has reached a new high.

“I’m 100% happy about our performance,” Mpho Selebalo from Kagiso, a township west of Johannesburg, said after the match.

“We died a proud death,” said Innocent Ndlovu from Rosettentville, a suburb in Johannesburg. “I’m disappointed, but at least we made history by beating France.

“We are also making history by hosting this spectacular World Cup. I support the tournament all the way,” Ndlovu added.

Ndlovu did not waste time in choosing a new country to support, opting for the top-ranked Brazilians. “Bafana was my first choice.”

Brazil seems to be a favourite of many South Africans, not surprising since this is a team that has always had a place in local hearts. Where African teams, who’ve disappointed, are concerned, Ghana carries the hopes of many.

“Brazil is the best. Even if they do not win the World Cup I know they’ll make it to the final,” said Tshepoaka Mathebula, a street vendor in Johannesburg.

Support for the World Cup is far from dwindling, if soccer fans’ views are anything to go by. “I feel like crying. But I’m still supporting the World Cup,” said a visibly emotional Pat Mahlangu.

Jappie Mathabathe, a Bafana fan from Braamfontein, said he won’t stop cheering for the spectacle “because I’m proudly South African”.

Fans can still look forward to top-class football played in the country’s magnificent stadiums. The thrilling Argentineans, led by the mesmerising Lionel Messi, have secured their place in the last 16. The Brazilians are tipped to collect the maximum nine points in Group G – but the Samba Boys will first have to beat the inspired Portugal, also likely to progress, to accrue all points.

However, nations like current champions Italy, the star-studded Spanish team, the desperate England, Ghana and Germany will have to play their hearts out in order to qualify for the knock-out round.

Interesting times ahead indeed. There’s no question that South Africans will still frequent the stadiums and public viewing areas, and the vuvuzela will still add to the thrilling atmosphere at these venues.

International fans are enjoying the vibe in exciting South Africa. Many are surprised that the country is not what the European and British media organisations have made it out to be.

Gilolas Breton, a French fan from Réunion, is amazed that South Africa is not a war zone. “I saw on TV and read in the newspapers that people are being killed in South Africa. I think it’s false,” he said.

Breton, who jetted out of the country on 23 June, said he found South Africans to be welcoming. “I even slept in Soweto… I’m happy that I’ve enjoyed my travels in South Africa,” said Breton, who watched the Bafana versus France match at Mary Fitzgerald Square.

“I think South Africa is a country that’s developing very fast,” he said.