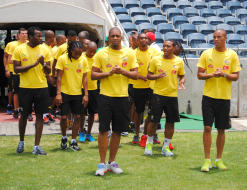 Despite not being able to win their warm-up games against Norway and Algeria, the national team are confident of their chances. 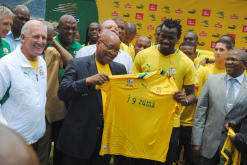 The continental tournament kicks off on 19 January and ends on 10 February.

Zuma visited the team at their training camp at Soweto’s Orlando Stadium and declared himself confident that the team will make the country proud.

He was accompanied by Sport and Recreation Minister Fikile Mbalula, the South African Football Association president Kirsten Nematandani and other Safa senior officials.

“I have seen the team, they are well prepared and they will showcase what they are made of. We are satisfied that the team is ready judging from the friendlies played,” said Zuma, “and I just told the boys to relax and do what they do best.”

He added that he wanted to hold up the cup at the moment of victory. “This means that I want them to win the tournament,” he said.

Zuma also advised the team not to listen to critics but to focus on what they do best.

“Some of the critics have never touched a ball and they cannot even play football, but theirs is to criticise,” Zuma said, adding that the country is behind them.

The president then had an opportunity to pose for pictures with the Bafana Bafana players who were in high spirits ahead of the tournament.

Confidence ahead of tournament

The team also assured South Africans that they are going to win the tournament.

Last week, the Local Organising Committee assured the continent that South Africa is ready to host the tournament.

At the eleventh hour South Africa took over the hosting of the tournament from Libya, which withdrew following the political turmoil during the Arab Spring.

The tournament will be played in five cities and towns – Johannesburg, Port Elizabeth, Durban, Mbombela (Nelspruit) and Rustenburg. All of them have upgraded or newly-built stadia, thanks to the 2010 Fifa World Cup which was held around the country.