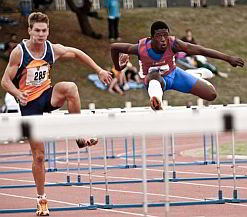 SAIDS has launched a campaign to root
out doping among South Africa’s athletes.
(Image: Sports and Recreation) 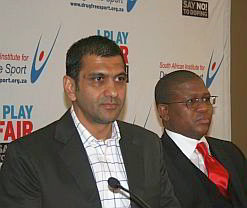 The South African Institute for Drug-Free Sport (SAIDS) has launched a major campaign to raise awareness about illegal performance-enhancing substances and curb doping among local athletes.

SAIDS introduced its “I Play Fair, Say No to Doping” campaign at a media conference in Johannesburg on 14 June 2011.

“The core of our campaign is ‘I Play Fair’, let’s bring ethics back into sport,” said Shuaib Manjra, SAIDS chairperson.

The drive, targeting professional and amateur athletes across the country, will provide education on banned substances and run actual doping tests. The campaign’s pillars are deterring, detection and prosecution, said Manjra.

SAIDS’s latest statistics show that there has been a 100% increase in positive tests for doping over the last two years. The number jumped from 19 in 2009/10 to 50 in recent months. More than 2 000 athletes were tested in each year.

Doping is an unacceptable practice that needs to be rooted out for the benefit of the country, said the Cape Town-based institute. The problem of doping is compounded by lack of broad knowledge on banned supplements in local athletics. Manjra conceded that some sports people were inadvertently taking the drugs.

The Department of Sports and Recreation has thrown its weight behind the new campaign. “We support the South African Institute for Drug-Free Sport in this regard to aggressively attack the use of drugs in sports,” said its minister, Fikile Mbalula.

Mbalula will attend the Super Rugby match between the Bulls and Sharks at Loftus stadium in Pretoria on 18 June to raise awareness about the drive. His deputy, Gert Oosthuizen, will do the same at the clash between the Cheetahs and Stormers in Bloemfontein, also on 18 June.

The government would like to see the campaign reaching out even to the “far-flung areas of our country”, said Mbalula. “It must be brought to the attention of everybody … that using drugs is cheating”.

I Play Fair will also enter the realm of social media to reach its targets and campaign road shows are planned for the country’s rural areas.

SAIDS appealed to schools to give it permission to conduct doping tests among adolescents, as part of the campaign. The agency is to sign memoranda of understanding with academic institutions. “We’re willing to work with schools. All they have to do is come forward,” said Manjra.

Parents are also urged to endorse testing in schools. “We have to intensify our awareness efforts, working with parents and young people,” said Mbalula.

SAIDS’s initiative also has the backing of the World Anti-Doping Agency. Doping is a huge threat to sports all over the world and it’s critical that federations promote campaigns that deter the trend, the world body’s director general David Howman said in a statement.

The supplements manufacturing and distribution sector remains largely unregulated, according to SAIDS, and new legislation needs to be introduced.

Lack of regulation is to blame for the general accessibility of supplements that contain banned drugs, like anabolic and prohormones stimulants.

“This is an industry which is jeopardising the future of many of our athletes and we need to regulate it,” Manjra pointed out.

SAIDS has launched its intelligence unit to uncover manufacturers and traffickers of illegal sports drugs. It alleges that these individuals are targeting unsuspecting athletes across the country.

“We believe that every athlete who leaves the shores of the country to represent us is an ambassador of the country,” Manjra said.

“We want a pledge from our athletes for clean play.”