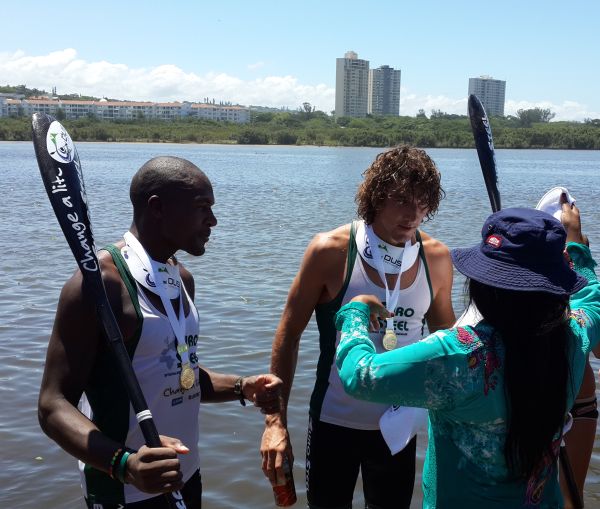 Sbonelo Zondi and Andy Birkett receive their gold medals from the MEC for art, culture, sport and recreation, Ntombikayise Sibhidla-Saphetha, at the finish of the 2014 Dusi Canoe Marathon at Blue Lagoon in Durban. (Image: Lucille Davie)

Andy Birkett and partner Sbonelo Zondi won the 2014 Dusi Canoe Marathon on Saturday, and 23-year-old Birkett joined an elite group of under-25s who can proudly boast their Dusi green numbers – an honour given to those who finish 10 marathons.

A handful of youngsters have done 10 Dusis by their mid-20s, some having started at 12 years old. Birkett completed his first Dusi at the age of 13, with his 14-year-old brother. Most Dusi paddlers only get their green numbers badges in their 30s – or even older. Nowadays paddlers have to be 15 years old to do the Dusi.

In what can only be described as paddling poetry, Birkett and 25-year-old Zondi crossed the Dusi finish line this weekend to win the men’s doubles race, with the widest smiles on earth.

The pair stood up in their narrow canoe, Birkett’s paddle raised high above his head, Zondi’s arm stretched skywards, before both jumped into the water in triumph. They finished in a time of seven hours, 43 minutes and 50 seconds, almost 10 minutes ahead of their second place rivals. They gave one another an exuberant bear hug, while still in the water. The large crowd on the bank cheered and clapped wildly.

“We had a great race; we stuck to our game plan,” said Birkett at the finish. “This year is a really special year for me.” Zondi also started paddling as a teenager – this is his ninth Dusi.

Said one veteran paddler, who has done 25 of the marathons: “Birkett has a tremendous exuberance and joy about him which energised the crowd.” He is also the under 23 World Canoe Marathon Champion for 2013.

Known colloquially as The Dusi, the 62-year-old race has over 1 500 canoeists paddle and portage their pencil-thin canoes from Pietermartizburg to Durban in KwaZulu-Natal over three days, a distance of 120 kilometres. Often paddled in grinding heat and through raging rapids, the fragile, fibreglass boats can be wrenched against rocks and torn open, or worse still, wrapped around rocks. That leaves the canoeists to carry two pieces of boat out the valleys to the nearest road, and marks the end of their race.

But none of these troubles affected the winners, who paddled perfectly in sync, their lean bodies smooth paddling machines. And even out the water they were a synchronised machine – once out the boat, Birkett passed his paddle backwards to Zondi, and grabbed the boat to put it on his shoulders, followed by Zondi doing the same. The canoe just never stopped moving, in a flawless pattern rehearsed many times in the months before the race.

Birkett says of his first Dusi with his brother: “We were two rookies who would ask the paddlers around us where to go. We didn’t want to portage.” He started paddling because he didn’t enjoy cricket at school, and soon found he loved paddling.

The race alternates – one year a single boat will win, the next the double, with two paddlers, either two men or women, or a woman and man. Fathers and sons do the race, mothers and sons, sisters, brothers, and combined brothers and sisters, and of course, husbands and wives. The first day consists of 42 kilometres of paddling and running with the boat, the second 46 kilometres and the third, 32 kilometres.

Birkett and Zondi decided a year ago to train together to win the Dusi. It was clear they had a good chance when on the first portage they gained time on the field. They finished the first day almost five-and-a-half minutes ahead of their nearest rivals. The pair maintained that advantage throughout the next two days, portaging the steep run over the Burma Road Mountain on the final day in just over 25 minutes, a mind-boggling time. By the time they finished the race, they had gained almost 10 minutes on the second placed pair of Hank McGregor and Jasper Mocke.

The Dusi consists of several portages on each day, in which the boat is placed on the shoulders, and paddlers run around or up hills, or take shortcuts to circumvent bends in the river. The longest portage, on the first day, is eight kilometres, up and down several hills. This means it’s not only a paddling race, but a running race too.

For the last four intensive months, both men have been training on nearby dams and rivers to get those details 100 percent. “It is about combining the two of us to get strong at the portages, and good at getting back in the boat.”

Birkett acknowledges the strength of his partner. “He is the faster runner – I don’t know how he does it, he has such scrawny legs,” he laughs.

Zondi did his first Dusi at the age of 16, introduced to paddling by a friend. “I was a soccer player before this,” he says. He grew up on the banks of the Shongweni Dam in KwaZulu-Natal, and soon dropped soccer for paddling. He understands the value of training. “You need to train hard, to give time in the river. You need to know exactly where you’re going.”

Birkett says he became tired on the first day, after the Finger Neck portage, and slipped his paddle back to Zondi by mistake, who promptly gave it back to him. “I was having a low. You just have to drink your juice, and vasbyt. As long as you’re hydrated and drink regularly, you’ll be alright,” he says. Vasbyt is an Afrikaans word meaning “to hang in there”.

The pair almost broke the race’s first day record – they were just 45 seconds off, at two hours, 33 minutes, and 30 seconds.

Next year it will be a singles race, and the pair will be competing against one another. “It would be great to break the singles record,” says Birkett. It stands at eight hours and 29 seconds at present, set last year by Lance Kime. Both men plan to win the race next year, in single canoes, so it’s going to be riveting watching.

But there is some regret at not paddling with Zondi next year – Birkett says they make a good team. “We both have a good sense of humour. It would be silly not to race together again.” This is what they will do the following year, for the 2016 Dusi, when it is a doubles race again.

Asked what it takes to win the race, Birkett says: “Consistency, and making no mistakes. You can’t slacken off, there is no margin for error.”

The Dusi is different from road running races, or even cycling races because there is one variable factor: the level of the water. If the water is flowing strongly, records will be broken, but also boats. Entering rapids is always unpredictable, as the strong flow or other boats can push a boat on to rocks, or into side shoots that can have a boat end up going down a rapid backwards, or wrapping around rocks. Generally these days, however, the level stays consistent, as water is released from several dams up river. But if it rains during the race, the water level can rise suddenly.

This year, 1 650 paddlers entered in 840 boats, with several dropping out on the first day, due to injury or broken boats, says John Oliver, the Dusi time keeper. He confirms that 770 boats finished the race.

It is as competitive for the women as for the men. Abbey Ulansky won her ninth Dusi together with Robyn Kime this year in a time of eight hours, 50 minutes and 59 seconds, just more than an hour behind Birkett and Zondi.