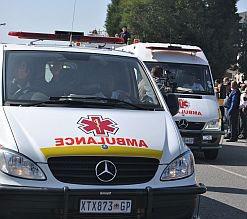 The North West provincial government bought 73 brand new ambulances specifically for the recent 2010 Fifa World Cup, and now it has distributed the fleet amongst the province’s state hospitals.

New Volkswagen and Mercedes Benz ambulances were bought to the tune of R17-million (US$2.3-million) ahead of the football spectacle to meet the potential demand for health services during the event.  The Royal Bafokeng Stadium in Rustenburg, North West’s platinum mining area, was one of the World Cup host venues.

All these vehicles were stationed in the benefiting communities during the World Cup, said the province’s Department of Health and Social Development spokesperson Tebogo Lekgethwane.

The North West Emergency Medical Rescue Services College in Orkney, whose health professionals were deployed during the tournament, has been granted two ambulances to use.

“The department bought a new fleet of ambulances to meet World Cup demand,” said Health and Social Development MEC Rebecca Kasienyane in a statement. “This was necessary because we did not want the tournament to affect existing emergency services.”

“The more ambulances we have, the earlier we’ll respond to emergencies.”

More than 40 other new ambulances were allocated to the districts in early 2010, according to Lekgethwane.

As North West is still facing a shortage of the life-saving vehicles, the 73 inherited from the World Cup are welcome, Kasienyane said. “I must however emphasise that these ambulances will not completely eradicate the shortage, but we do believe they will substantially improve the situation.”

The provincial government will continue to look for additional funds to buy more vehicles “because we know that a shortage of ambulances hinders transportation of patients such as pregnant women, the seriously sick and those injured in road accidents, to hospitals and clinics”.

A call for cautious driving

One of the prevailing challenges was to ensure that old ambulances are replaced with new ones, and are no longer used. Kasienyane also appealed to emergency drivers to drive more cautiously.

“The department has also previously dealt with cases of negligent driving on the part of our drivers,” she said. “This has led to substantial shortfalls.”