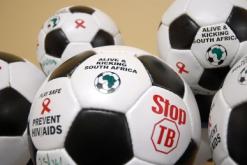 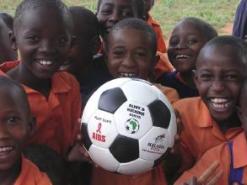 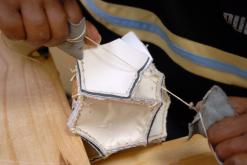 Balls are handmade by trained staff. 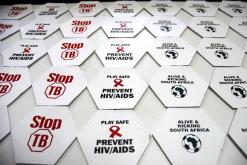 The panels are the only parts which are made
by a machine.

South Africa is eagerly awaiting the 2010 Fifa World Cup. From the private and public sectors right down to individuals, everyone is getting involved. Now Alive & Kicking, a non-profit UK-based organisation that operates in South Africa, Kenya and Zambia, has launched an initiative to supply 100 000 footballs to children in sub-Saharan Africa by 2010.

The “Balls in Africa 2010” campaign calls on supporters in the UK to sponsor a football by means of a small donation. The aim is to get 100 000 balls into African communities because, says Alive & Kicking, although the next World Cup will take place in Africa, millions of African children have never played with a real ball but are forced to improvise with plastic bags tied up with string.

Alive & Kicking is a ball manufacturing organisation with a conscience. It uses only local skills and materials to produce top-quality handmade leather footballs, netballs and volleyballs – and soon rugby balls – which are then given to communities throughout Africa. The organisation says its products have been distributed in all 53 African countries.

The ball was developed in Kenya by experts from the UK, Kenya and shoe manufacturing company Bata, and is well thought of by professionals such as Fabio Capello, current manager of the national England football team, who used Alive & Kicking balls on a coaching trip to Lesotho in April 2008.

MD of the South African office, Rukia Cornelius, says that the project’s main goals are to create sustainable employment and develop skills that individuals can use to improve their lives, as well as give the children in poor communities the chance to engage in the healthy activity of sport. While the spectacular 2010 football tournament is a tremendous opportunity for the entire continent, there is the need to create a lasting legacy that will endure beyond the event.

The local operation is only six months old but since its official launch in April 2008 has already reached a production capacity of 500 balls a month. Based in Wellington, Western Cape, the South African branch utilises the talents of 30 stitchers, mostly female, drawn from the local community.

Production manager Wolfgang says that all balls are handmade – the only machine is the one that cuts the panels. “So far we are managing to produce one ball per day per person, but we are aiming to achieve two within a short time. In Kenya and Zambia the stitchers, who are more experienced, produce three balls per day each.” The current benchmark for self-sustainability is 2 000.

The Wellington area is a hub of the leather industry and consequently skilled leather workers were available, but help was also forthcoming from local company Mossop-Western Leather who offered the use of a building on its premises for two years, rent-free. Mossop, the largest tannery in South Africa, is a major supplier to the footwear industry and also exports its leather to the UK, Spain, Portugal, India and the Far East.

The local team was trained by Kenyan Francis Kithuka, a stitcher with 16 years of experience. Kithuka also trained the Zambian team, who are now displaying formidable ball-making skills. In total 220 jobs have been created with Alive & Kicking.

The Kenyan operation recently completed an 81 000-ball order for the Union of European Football Associations (Uefa) in 21 months, and Alive & Kicking is currently in negotiations for a follow-up order of 120 000 more, to be made in all three countries over the next four years for distribution to schools in every African country. The organisation is also in talks with the Australian Football League.

Cornelius, fresh from a seven-year tenure as national manager for the Treatment Action Campaign (TAC), an activist organisation that fights for the rights of people with HIV, leaped at the chance to become involved with Alive & Kicking. According to her, the fight against poverty and unemployment is not a focus area of the TAC, and moving to Alive & Kicking was a natural step.

This is because Alive & Kicking not only promotes sport, but it promotes health too. Each ball carries messages designed to raise awareness of social issues such as HIV/Aids, malaria, tuberculosis, gender-based violence, rape and substance abuse, and to help protect the vulnerable.

The local operation has also embarked on a series of health and wellness talks for employees, where relevant matters are discussed, such as testing for HIV and discrimination in the workplace. “We couldn’t start printing balls with HIV messages on them if we don’t talk about it ourselves,” says Cornelius.

Alive & Kicking has received extensive backing from the Western Cape Premier’s office, the 2010 Local Organising Committee, and the Drakenstein Municipality (where Wellington is located). Internationally it is supported by Uefa and the United Nations Children’s Fund.

The organisation has found that cheaper balls of inferior quality, imported from China and Pakistan, are competing with the more durable Alive & Kicking product. “We want to encourage people to buy South African,” says Cornelius, “and invest in the local industry. By spending a little more they will be getting a ball of better quality that will last much longer, and will also be doing their bit to help others.”

Just in time for Christmas, Alive & Kicking balls will be available in Pick n Pay retail outlets in the Western Cape. “At this point we are testing the waters, and if successful we will branch out into more retail stores,” says Cornelius. Balls can also be bought directly from Alive & Kicking, or can be distributed by the manufacturer on behalf of a sponsor.

Balls from the local operation have already been distributed far and wide. The Western Cape Premier’s office, Child Welfare, the Desmond Tutu High School in Paarl, and the Nelson Mandela Children’s Fund are just a few of the many recipients.

The road to Johannesburg

In the run-up to 2010, one of the many interesting initiatives is the Spirit of Football, a British fan-run project based on the Olympic torch principle. Here, a ball travels overland through a number of countries, carrying with it the spirit of football, while fans and professionals along the way play with it and sign it, until it reaches its destination in the host country.

In 2002 the ball travelled 12 800km from Battersea Park in the UK, the home of the first ever FA-rules football match, to Korea and Japan, and in 2006 it again left the UK and headed for Germany. Compared to the three months of the first journey, the second took a mere 10 days.

In 2010 a ball made by Alive & Kicking will make an epic five-month, 16 000km pilgrimage from the UK, down the West coast of Africa, across Central Africa, and down the East coast, to finish in Johannesburg.

“In 2010 we want to use the ball to help ensure that the whole African continent benefits from the impact of the greatest sporting event in the world,” say the organisers of Spirit of Football. “Football is its own language, and it is a universal one. We want to show just how fluently the people of Africa speak it.”

Along the way balls will be donated to communities and football organisations, and Africa’s culture of football will come under the spotlight. Alive & Kicking was chosen to supply the ball because, say the organisers, it embodies the very essence of development through football in Africa.

In 2014 the ball will make its longest journey, from the UK via Iceland, Greenland, the US and Central America and the West coast of South America, to Rio de Janeiro in Brazil.