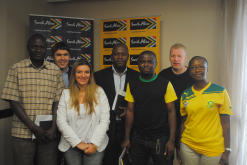 Sports and business journalists from Zambia, Nigeria, Kenya, Russia and Brazil were in South Africa for the Afcon experience.
(Image: Ray Maota) 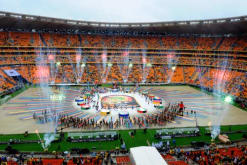 Brand South Africa hosted journalists visiting South Africa for the 2013 Orange Africa Cup of Nations (Afcon). The tour kicked off in Durban two days before the opening ceremony with a visit to the striking Moses Mabhida Stadium, a 2010 Fifa World Cup venue that will also host five Afcon matches.

The visiting journalists represented a mix of sports and business publications from countries including Russia, Zambia, Brazil and Qatar.

The tour began at the Elangeni Hotel with a number of short talks that highlighted KwaZulu-Natal as a trade destination. The Durban visit was day one of a tour for the journalists that included the opening ceremony and opening matches of Afcon 2013 at the National Stadium in Johannesburg on 19 January.

Phillip Sithole, the head of KwaZulu-Natal Tourism, said investing in sports events such as the Fifa World Cup had produced an excellent return on investment for the city.

“If you look at the benefits we received from the World Cup as well as [UN climate change summit] COP 17, they now amount to billions of rands,” Sithole said. “Hosting major events also addresses issues around infrastruture; you can’t host major events if you don’t have the infrastructure for them.”

The most visible symbol of the infrastructure development for major events in the city of Durban is undoubtedly the Moses Mabhida Stadium with its massive arch, which begins in two pieces on the south side of the stadium before coming together as one, representing the coming together of the South African nation.

It was thus a natural choice to take a tour of the stadium, which was buzzing with activity ahead of Afcon 2013. A guided tour included a visit to the well-equipped and spacious players’ changing rooms and a journey to the top of the arch on the SkyCar. From there, one took in a wonderful panoramic view of the surrounding city.

During the morning meeting, the journalists also learnt about the Sharks rugby team, which is based in Durban. Not only is the Sharks one of the most successful brands in KwaZulu-Natal and South Africa, it is also one of South Africa’s top 100 brands, making it a “superbrand”.

Sharks’ advertising and match day events manager Novashni Chetty laid out the holistic approach of the franchise to Durban, KwaZulu-Natal and beyond and explained how the players have become an integral part of different communities and helped to uplift them.

The Sharks’ reach was emphasised by an anti-bullying campaign that has gone beyond the boundaries of South Africa, and the signing of a deal with UAE Rugby for the Sharks to open three academies in Abu Dhabi, Al Ain and Dubai.

Claude Pretorius, destination marketing manager of Trade and Investment KwaZulu-Natal, said major events such as the Fifa World Cup and Afcon 2013 were opportunities to create awareness.

“Because of the awareness around these big events, it’s an opportunity for us to host our target audience during these events. While they’re here we give them an opportunity to see the existing infrastructure, to see the planned projects, to see what the opportunities are,” Pretorius said.

“What is also very important is the amount of international publicity that South Africa gets for free, which would otherwise be very expensive for us,” he added.

In the afternoon, the group also paid a visit to Transnet’s Durban Container Terminal in Durban Harbour, the busiest port in Africa. The evening featured dinner at the uShaka Marine World theme park.

Brand South Africa continued its Afcon tour in Johannesburg the following day, 18 January, starting at the Southern Sun in Sandton, north of the CBD.

At the breakfast meeting, the journalists were given overviews on South Africa’s sport infrastructure, what broadcasting means to sport, and how the trade and tourism sector opens South Africa up for business.

Coen said: “I’m looking to relate the 2010 Fifa World Cup legacy of South Africa with what Qatar can achieve from their hosting of the event in 2022.”

Agapov said that he was also interested in South Africa’s Fifa World Cup legacy and the problems the country faced while organising such an event. “Russia will be hosting the 2018 World Cup and the South African experience will help us a lot to realise all the challenges and opportunities it brings,” he said.

Agapov was also in the country to report on the opening and second games of Afcon.

Musumba said: “I’m keen to learn how South Africa is positioning itself on the global map after the World Cup and how corporate firms extend their influence to others in the world.”

Sinyangwe said that he would attempt to learn why South Africa never looked back after hosting the 1995 Rugby World Cup, the event that launched the country into the category of prime destination for global sport.

Mathews explained that broadcasting has brought billions to sport through its coverage of the different disciplines.

“In football sponsorship we make sure clubs and stadiums comply with certain regulations – for example, there should be 40 perimeter boards on the ground as well as an electronic substitution board, and the size of the numbers on jerseys should be standard for all teams.”

He also spoke of the sponsorship of sport having a broader economic impact in society in terms of infrastructure development, entrepreneurship, tourism, networking and global exposure.

He said: “People follow the World Cup for the experience of being part of the global village.”

Ngwenya summed up the experiences of the global football extravaganza from the perspective of South Africa’s sponsors and fans.

“Stadiums were built which now enable the Confederation of African Football to have faith that we can stage an event such as Afcon with just a year’s planning,” said Ngwenya. “Such an event usually takes four years to organise.”

He added that sport events should be used as a tool to propel economic growth.

“Football is a game of billions – in terms of money – which is why it makes sense to host events of this magnitude.”