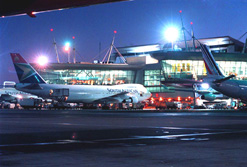 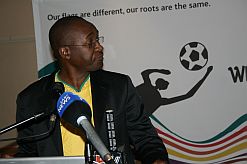 OR Tambo general manager Chris Hlekane
Addressing the media about airports’
readiness for the World Cup. 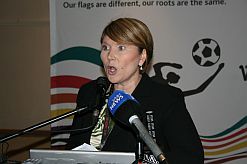 ’s airports will be fully upgraded and ready to handle large volumes of traffic during the 2010 Fifa World Cup, the Airports Company South Africa (Acsa) said at a press briefing in on 2 March.

Acsa announced that their preparations, most of which involve upgrading current facilities, are now 90% complete.

“We are confident that, together with our airport partners and staff, we will be ready to meet the requirements of this major event,” said OR Tambo International Airport general manager Chris Hlekane, speaking on behalf of Acsa.

The 10% of work remaining, largely tying-up loose ends, will be concluded in time for the World Cup, Hlekani said. “By the end of March a lot more will be accomplished, [we’ll be] closer to 100%.”

Acsa began upgrading the country’s airports in 2006, investing about R17-billion (US$2.3-billion) in operations even before Fifa announced in May that year that had won the bid. But since then construction has been speeded up to meet the June deadline.

All projects at ’s OR Tambo, a key entry point for most World Cup visitors, were completed in December 2009.

The airport, named after apartheid struggle icon Oliver Tambo, now boasts a multi-storey parkade with 165 000 bays, and a revamped central terminal building and check-in facility worth R2.2-billion ($293-million) – this will be able to accommodate about 28-million passengers a year.

Two new fuel tanks – with a capacity of 60-million litres each – have been installed there, along with seven new aircraft stands, which takes the total number to 105.

“The bulk of the movement [during the World Cup] will be from OR Tambo,” Hlekane said.

has also undergone massive improvements, which are nearing completion. Most of the major projects – including the central terminal building, the 8 000 parking bays and vehicle roads upgrade – will be complete by the end of March.

The airport’s central terminal has been expanded to accommodate 14 million passengers a year, while the number of airport stands has been increased by five, bringing the total to 32.

The newly built in will be completed in April and be operational by May, a month before kick-off. Some R6.7-billion ($893-million) has been spent on the facility, which will accommodate 7.5-million passengers a year.

A number of the country’s regional domestic airports have also been revamped and will be ready for the tournament. An upgrade of the terminal was completed in December 2009, and a temporary terminal set up to “meet the demand” will be finished by May.

will also have a temporary terminal ready by May. Similar set-ups at the East London and airports will be completed by the end of March to accommodate additional traffic.

Acsa said it aimed to make the temporary structures in and “cost-neutral” by using revenue generated from advertising and retail sales to fund the building process.

Acsa has experienced a spike in slot applications by airlines in the run up to the World Cup. “We’ve seen an increase in terms of slots that have been applied for the [June-July] period,” said Andre Vermeulen, Acsa’s group manager of operations.

The company has allocated 120 000 extra slots to airlines and more are still available. Although not all slots may be used, Vermeulen said airlines have shown to be responsible in their bookings and it looked promising that most will be used.

The number of flights is expected to double over the World Cup period compared to other times of the year, Vermeulen added.

Acsa has forecast that about 450 000 visitors will flock to during the first two weeks of the tournament. The frequency of domestic flights will also increase during the knock-out matches, Hlekane said.

Acsa has approached the Department of Labour to enable it to extend its employees’ work hours in the June-July period. As there will be more flights, airports will have to operate for 24 hours a day during this time.

“We want to ensure that the department appreciates the number of hours we will work,” Hlekane said.

The airports will require their staff to work overtime and unions representing the employees have agreed to the plan, Acsa said. “We signed a wage agreement plan … we’re comfortable with unions on that basis,” Hlekane added.

Airport staff are also being trained to communicate in French, German and Spanish to accommodate foreign-language visitors.

Fears of a jet-fuel shortage in the country during the World Cup are unfounded, Acsa said at the briefing. The company has sufficient jet fuel stocks for the tournament’s period. “There will be no disruption in terms of fuel,” said Hlekane.

Acsa said it plans to have four to five day’s cover of jet fuel stocks – the ideal average – during the World Cup period. “They [suppliers] understand our demands. They understand when we’ll need fuel,” said Vermeulen.