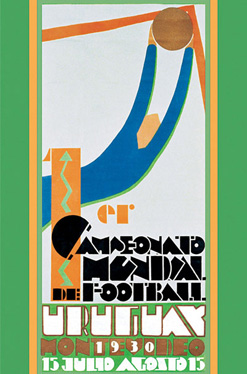 A lot happened in the year 1930. Constantinople was renamed Istanbul, the planet Pluto was discovered, and Agatha Christie’s first full-length Miss Marple novel rolled off the presses. And world football as we know it emerged with the inaugural Fifa World Cup in Uruguay.

None of the competing teams had to qualify. A total of 13 teams accepted invitations to compete, four from Europe, eight from South America and one from the United States.

The draw for the group stage was left until all the teams had safely arrived in Uruguay. Once underway, the tournament produced football at its contemporary best. By the end, the host nation won through and became the first team to lay hands on the coveted trophy, then known as Victory, or simply as the World Cup.

By the time of the second edition in Italy four years later, interest in the global showdown had soared. Thirty-two countries took part in a qualifying round to determine the 16 finalists – and again, the hosts carried off the honours.

If good things really come in threes, hosts France should have won the third Fifa World Cup in 1938. The French made it to the quarter-finals but were beaten by champions Italy. The Squadra Azzurri duly went on to claim the world crown for the second time in a row, cementing their enduring reputation as formidable exponents of the game.

The Second World War caused a 12-year gap until the cream of the world game gathered again in 1950. During the war Dr Ottorino Barassi, the Italian vice-president of Fifa, hid the trophy in a shoe-box under his bed to keep it safe from occupying troops. In 1946, the trophy was renamed the Jules Rimet Trophy, in honour of the then Fifa president, who had worked hard to preserve the spirit and structures of the game during the war.

The starting field in Brazil for the 1950 World Cup again numbered just 13 nations. Following a league-based preliminary round, Brazil, Sweden, Spain and Uruguay played off for the trophy.

To seal the title, A Seleção needed just a point from their meeting with Uruguay at the Estádio do Maracanã in Rio de Janeiro. But a crowd officially recorded as 199 954 – estimates vary from 174 000 to as many as 205 000 – watched in mounting horror as the Maracanazo, the Maracana Disaster, unfolded. One of the biggest upsets in footballing history ended with the Uruguayans sealing a second triumph.

The next World Cup also had a shock outcome. Germans refer to the events of 1954 as The Miracle of Berne, as Sepp Herberger’s West Germany beat the seemingly invincible Hungarians 3-2 in the final. The 1954 tournament, held in Switzerland, was the first time fixed squad numbers were assigned to all players.

It was also easily the biggest event of its kind thus far, with a record number of nations competing in the qualifying round. The Asian Confederation was founded that year and entered teams from Japan and Korea, with Egypt representing Africa in the first truly global edition of the event.

Sixteen teams earned the right to compete in Switzerland, and this remained the size of the starting field until the 1982 finals in Spain, when it rose to 24.

In 1958, the show in Sweden belonged to a 17-year-old by the name of Pele, a major contributor to Brazil’s maiden Fifa World Cup triumph. Just Fontaine of France scored 13 goals at the tournament, a record which still stands today, and the finals between England and Brazil resulted in a first-ever goalless draw. Sweden 1958 was also the first Fifa World Cup to be broadcast around the world on TV.

Brazil retained the world crown in Chile in 1962, but 1966 finally saw a host nation triumph once again, as England defeated West Germany 4-2 in a thrilling and controversial final at Wembley.

The Brazilians were back at their best for the 1970 finals in Mexico, sweeping aside the competition and taking home the Jules Rimet trophy in perpetuity in honour of their third triumph. For the second and last time since 1950, no player was sent off during the tournament.

The finals also saw the first use of substitutes, and the introduction of yellow and red cards. Viewers at home could tell the difference too: the Fifa World Cup was broadcast in colour for the first time.

At the 10th edition of the finals in 1974, the honour of receiving the new Fifa World Cup Trophy for the first time fell to the West German hosts. The tournament is also fondly remembered for the startling and revolutionary Total Football practised by beaten finalists the Netherlands, featuring all-time legends Johan Cruyff and Johan Neeskens.

Another of the great footballing nations finally registered a maiden triumph in 1978, as Argentina hosted and won the event. It was to prove the end of the road for a great Dutch generation, runners-up for the second time in a row, and then not present at all for the first 24-team finals in Spain four years later. That tournament was won by a resurgent Italy.

As Pele is to Brazil, so is Diego Maradona to Argentina. The diminutive midfielder led La Albiceleste to their second world crown at Mexico 1986, and also featured in a re-run of the final against West Germany at Italy 1990.

On that second occasion, Franz Beckenbauer’s side exacted revenge and the Germans drew level with Brazil and Italy on three Fifa World Cup triumphs apiece. The Argentinians earned the dubious distinction of becoming the first team not to score in a Fifa World Cup final – and also of losing two players to red cards during the match.

Ahead of the 1994 finals in the USA, a record 147 nations started out on the qualifying road. For the first time in history, the final was decided on penalties, with Brazil defeating Italy in the decisive shoot-out to secure a fourth triumph.

The records continued to tumble in the years that followed. The 1998 tournament in France was comfortably the biggest-ever event of its type, with a starting field of 32 and a total of 64 matches played. The name of Zinedine Zidane will forever be associated with the hosts’ victory.

Brazil’s triumph at the 2002 Fifa World Cup Korea/Japan, the first time the event was held in Asia, meant the South Americans could claim the distinction of winning the famous trophy on every continent that had staged the finals. And in 2006, Italy beat hosts Germany in the semi-finals to settle the clash between two three-time winners in their favour. Fabio Cannavaro and his team went on to beat France on penalties in Berlin and earn a fourth star for the national jersey.

And what of 2010? New records and fresh milestones look a formality, as the world’s biggest single sporting event decamps to yet another new continent.

Can Brazil pull further clear with a sixth triumph, or will the Italians retain the trophy and draw level on five? Or could an African side open a new chapter in the long and exciting history of the game? 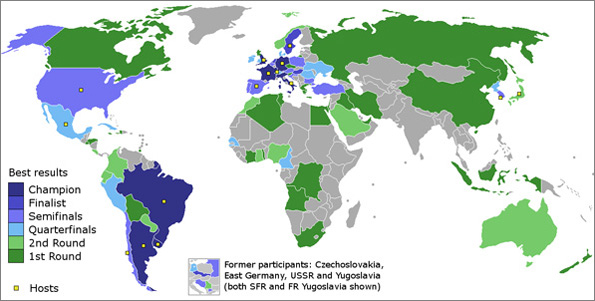 ** There was no official World Cup final match in 1950. The tournament winner was decided by a final round-robin group contested by four teams (Uruguay, Brazil, Sweden, and Spain). However, Uruguay’s 2–1 victory over Brazil was the decisive match – and also coincidentally one of the last two matches of the tournament – which put them ahead on points and ensured that they finished top of the group as world champions. Therefore, this match is often considered the final of the 1950 World Cup.

*** Sweden’s 3–1 victory over Spain, played at the same time as Uruguay vs Brazil, ensured that they finished third in the 950 Fifa World Cup.