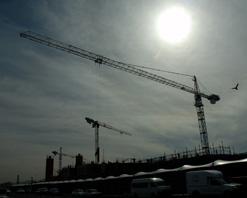 Cape Town International Airport
undergoing refurbishment to allow for the
expected influx of visitors for the 2010
Fifa World Cup. South Africa is already
enjoying the benefits of large
infrastructure projects that wouldn’t have
gone ahead if it weren’t for the
tournament.
(Image: Rodger Bosch,
MediaClubSouthAfrica.com. For more free
photos, visit the image library.)

The 2010 Fifa World Cup is to inject an additional R21.3-billion (US$2.52-billion) into South Africa’s gross domestic product (GDP), according to research by the Department of Environmental Affairs and Tourism.

Of the projected growth, R12.7-billion ($1.5-billion) is attributed to direct investment and tourist spend will contribute the remaining R9.5-billion ($1.13-billion).

But Dr Azar Jammine, Econometrix chief economist, expects GDP growth to be even higher. “It is an underestimate because capital inflow will be much more substantial,” he said. “The current estimate only amounts to 0.8% of the GDP.”

The 2009 Fifa Confederations and 2010 World Cup couldn’t come at a better time for South Africa. “Given the economic crisis, South Africa would have been in a very different position without these events,” he said.

The country is already enjoying the benefits of large infrastructure projects that wouldn’t have gone ahead if it weren’t for the Fifa World Cup. Besides Fifa events, the Indian Premier League cricket tournament and the British and Irish Lions rugby tour will also generate substantial revenue for the country.

The latest foreign tourism figures show negative growth, but Jammine is confident that this situation is only temporary. “Tourism will pick up again with people coming to South Africa for the events.”

The completion of major infrastructure developments in time for the Fifa World Cup has been under the spotlight for months. But according to Accenture SA, organisations shouldn’t neglect the importance of customer service throughout the event.

Accenture has taken an extensive look at the effects that the Fifa World Cup will have on customer experience. “The aim of the event should not only be to get people to come to South Africa, but to encourage them to return,” said Nikki Tyrer, head of  customer relations management at Accenture SA.

Tyrer pointed out that customer service will be a key differentiator during the World Cup. “We must position the country to maximise the benefits of the event beyond the actual tournament. Tourists only have a few weeks here, but the event is a phenomenal marketing opportunity for the country.”

The financial services sector, health, safety and retail will be under pressure with the influx of visitors to the country. It is estimated that the World Cup tournament will bring approximately 3-million tourists to South African shores, from across Africa and the rest of the world.

“These potential customers all have expectations in terms of customer service. Additional value added services will go a long way in meeting these expectations,” she said.

The retail sector will benefit greatly, with an international tourist expected to spend some R1 400 ($166) daily, while domestic visitors will spend about R750 ($89) daily. Thousands of tourists will be visiting shopping malls across the country, and Tyrer believes that retailers have to ensure that visitors have a positive experience of South Africa.

The most critical aspect is communication, she says. Organisations can enhance the customer’s experience by ensuring that foreign and local customers are catered for in their own languages.

One of the areas in need of attention is banking automatic teller machines (ATMs). She said although South Africa has a good ATM network, the supply chain relies on historic usage patterns. This is problematic, as more people will be making use of ATM facilities throughout the World Cup.

“This means ATMs will run out of money more quickly and we have to find ways around this,” she said.  The shoe and clothing retail sector will also have to make provision for tourists requesting information on sizing differences.

She emphasised that South Africa does have pockets of excellence as far as service is concerned. However, to ensure that the event has long-term benefits, operators and service providers need to develop and implement marketing, sales and service strategies that meet the needs of a diverse consumer base.