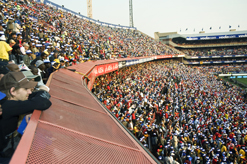 The third ticketing sales phase for South Africa’s 2010 Fifa World Cup has seen the number of tickets applied for hit the 500 000 mark in the first 10 days. South Africans made 77% of the requests, or 386 300 ticket applications, and the rest of the world 114 237 applications.

Applications from a total of 166 countries have been received, excluding the participating football associations’ allocated ticket sales.

“In comparison with the previous editions of the Fifa World Cups, the latest ticket applications figures are impressive,” said Horst R. Schmidt, chair of the football body’s ticketing committee.

Applications for individual match tickets or team-specific series can be made at www.FIFA.com/2010. South Africans can also apply for tickets at First National Bank branches across the country. The current third ticket sales phase, which opened on 5 December, will run until 22 January 2010.

About 1-million tickets for the tournament’s 64 matches are available in the third sales phase, including a limited number for the opening match and the final.

According to Fifa, all applications in this phase will be treated equally. If matches or price categories are oversubscribed, there will be an electronic random selection draw on 1 February 2010.

In addition, all 32 participating member associations have started to sell their allocated team-specific tickets, which make up 12 % of all purchasable tickets in the stadiums for the three group games of the respective team. These tickets will be available on the federations’ websites until 13 January 2010. For more detailed information, go to https://pmatickets.fifa.com.

“The number of domestic applications have increased significantly,” said Danny Jordaan, head of the 2010 Fifa World Cup Organising Committee South Africa. “By buying a ticket, South Africans buy not only a seat to watch a match, but also their spot in South African history.”