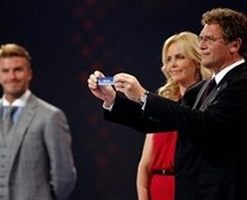 According to Danny Jordaan, head of the 2010 Fifa World Cup Local Organising Committee South Africa, the final draw held in Cape Town on 4 December 2009 delivered on the promise of a world-class event.

“We promised the country a spectacular and world-class event and we delivered on that promise. It was a great celebration of Africa which triggered a wave of passion and support on the streets of Cape Town, across South Africa and around the world,” said Jordaan.

He was speaking after a night that sparkled with all the glamour of Hollywood, but came alive with the rhythm and soul of Africa as the eight groups for the 2010 Fifa World Cup were decided.

“What we have to do now is to keep that passion and support for the World Cup alive, not just in terms of what happens on the field but also in terms of selling tickets.”

Jordaan noted that the African hopefuls would face strong competition in the group stages of the Fifa World Cup, which features one of the strongest line-ups in the tournament’s history.

“Cote d’Ivoire and Ghana are both in strong groups. We hope that they will be able to challenge in those groups, but all the African teams have steep mountains to climb. But it is a World Cup and that is what you have to expect.”

Commenting on the opening match of the tournament between South Africa and Mexico at Soccer City on 11 June 2010 Jordaan said: “the Mexican fans are passionate about their team and play attacking and attractive football, so we will have to be at our best when we play them. If we perform well against them and make it past the first round I think all of us will be very happy.“

The energetic 90-minute show was kicked off by a crowd favourite, Scatterlings of Africa, from one of South Africa’s greatest music exports, Johnny Clegg. The show featured a performance by the West African singer-songwriter Angelique Kidjo, as well as the Grammy award-winning Soweto Gospel Choir’s energetic rendition of the popular South African song Pata Pata.

The groups are drawn as follows: