On the final day of the 1996 Olympic Games in Atlanta, the life of South African marathon athlete Josiah Thugwane was changed irrevocably.

In the course of a little over two hours and 10 minutes, on the final day of the 1996 Olympic Games in Atlanta, the life of South African marathon athlete Josiah Thugwane was changed irrevocably.

The diminutive Thugwane, standing only 1.58 metres (5 foot 2 inches) tall and weighing just 45 kilograms (99 pounds), defeated an elite field in one of the Olympics’ most prestigious events to give South Africa an unexpected third gold medal at the Games after swimming star Penny Heyns had won two in the pool.

Suddenly, the little-educated athlete, barely known even in South Africa, was thrust into the world’s spotlight. Only then did the story of his incredible journey to the top of the marathon world emerge.

Thugwane’s first love had been soccer. He was a speedy striker, but too small to make it as a professional, which had been his dream.

One day, at the age of 17, he was watching a television programme that featured South African distance stars Matthews Temane and Xolile Yawa. Right there and then he decided that running was the future for him. His first move in that direction was to enter a half-marathon. He won, taking home 50 rand as the winner. “That was it: I knew I was a runner and this was my way out,” said Thugwane.

He made his first significant impact on the South African marathon scene in 1993 when he won the national title. Two years later he claimed victory in the Honolulu Marathon in Hawaii and took fifth place in both the World and South African Half Marathon Championships.

He recorded a very important victory in 1996 when he won the South African trials for the Olympic Games, because what followed was his massive win in Atlanta, the first ever Olympic gold medal winning performance by a black South African athlete.

His coach, Jacques Malan, was also coach of the other two South African marathoners in Atlanta, Gert Thys and Laurence Peu, and had predicted that one his athletes would win a medal.

Looking back on the race, Thugwane recalled: “I told myself at the start of the race, the country has chosen me, this is what is best for the country. That’s why the country chose me, to represent the country well. So I will try my best today.”

He didn’t realise how big his win was, but when he returned to South Africa he found out very quickly. He was met by a huge cheering crowd, including Nelson Mandela, at the airport in Johannesburg.

‘This was a big thing’

“I thought that after winning the Olympics I would go home and everything would be normal again. But I was surprised – after all of these interviews in Atlanta, I went back to South Africa and again all of the South African newspapers were coming to interview me! I realised that this was a big thing in the world. It became difficult to sleep – so many questions! I realised this was a big thing, because it was something that I did for the country,” said Thugwane.

From a poor athlete who cleaned kitchens and toilets for a living, he suddenly found people lining up to offer him contracts. Being only semi-literate, this was a confusing time and an unbelievable change for Thugwane. His running had finally brought him the way out that he had dreamed of – but with it some difficulties too.

People, aware that he now had money, would come begging at his door, while others tried to extort money from him or rob him. Thugwane eventually decided to move to a quiet Johannesburg suburb.

With demands coming fast and furious from all sides, he also took on a tutor to learn English, something that brought him immense pride and pleasure. “They can steal my gold medal but now they can never take away my education. I’m happy now because Nelson Mandela has given me this chance.

“He inspired me to achieve in sport. And it is because of him that I started school for the first time in my life.Thanks to him it is all paying off.”

Thugwane suffered through a number of injuries after the Olympics, but continued to prove himself a major contender in any marathon he entered.

In 1997, he took part in the prestigious London Marathon, finishing third in an excellent time of 2:08:06. In the same year he won the Fukuoka Marathon, claiming a personal best, national record and event record all at the same time with his 2:07:28 run.

He repeated his second placing at the Great Scottish Run in 1999 and claimed fourth in the Phalaborwa half-marathon. In 2000, Thugwane once again tackled the longer distance of the marathon and finished eighth in London and sixth in the New York City Marathon. In Korea, he finished as runner-up in the Dong-A Seoul Marathon in 2001.

Today Thugwane is doing more than just competing. “I’m starting now to help younger athletes in South Africa,” he explained. “I help to train, to provide training shoes, and to coach.

“I myself am sponsored by Nike and Coca-Cola, but when I need shoes for up-and-coming athletes, I buy the shoes myself – it’s no problem. I have a programme with Coca-Cola where young people come to train – it is the Coca-Cola Development program and I am their spokesperson.” 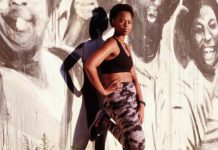 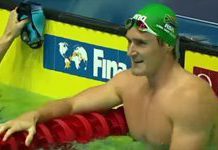 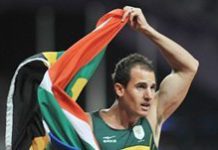 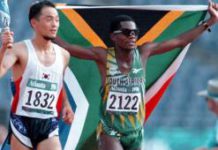