Sport Minister Fikile Mbalula urged South Africans to get behind the country’s national football team – and to give a warm welcome to visiting football fans – during an event to mark the 10-day countdown to the 2013 Africa Cup of Nations (Afcon) on Wednesday.

Africa’s showpiece soccer event kicks off on 19 January. The opening match will be played between Bafana Bafana and Cape Verde at FNB Stadium (which will be known as National Stadium for the duration of Afcon) in Johannesburg.

Hundreds of people clad in Bafana Bafana jerseys, waving flags and brandishing vuvuzelas gathered outside the Nelson Mandela Library in Johannesburg on Wednesday to mark the Afcon countdown.

Musicians Dr Malinga and Oskido kept the crowds cheering on Wednesday as Takuma, the official Afcon mascot, danced along with the team players and Sport Minister Fikile Mbalula.

The message from Mbalula was clear – all South Africans must support Bafana Bafana and welcome visitors from other countries.

“On behalf of government I want to thank you for your support. I encourage you to welcome our visitors as [the participating] nations come to the country.”

He said South Africans should show the visitors and fans what ubuntu was all about.

“To the [Bafana Bafana] coach and all your staff, our message to you is, ‘go and do us proud … go on to the field and fight'”.

Mbalula said while he was happy about Bafana’s performance in a warmup match against Norway on Tuesday, they needed to ensure that during the Afcon tournament they scored goals.

Bafana player Bongani Khumalo said the team was 100 percent ready to represent the country at Afcon. He thanked all South Africans for their support.

The crowd cheered as player Siphiwe Tshabalala introduced himself and encouraged supporters to keep believing in the team. “We value your support,” he said.

The team’s coach, Gordon Igesund, said: “I have no doubt that all the players will make you proud. We will do our best to win Afcon.”

Bafana will face Algeria in Soweto on Saturday in their final warm-up match. 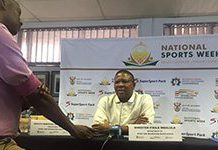 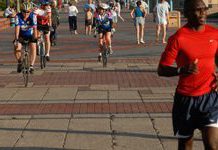