South Africa has introduced an Advanced Passenger Processing system, and will work closely with Interpol, international travel agencies and Fifa to monitor for the possible entry of soccer hooligans into the country for the 2010 Fifa World Cup.

The system, which started operating on 23 November, will help the Department of Home Affairs to check incoming passengers against a prohibited list of passengers before boarding planes at their respective foreign countries.

Deputy Home Affairs Minister Malusi Gigaba said that due to the high volumes of people that will be coming into the country for the World Cup, dedicated lanes have been established at both OR Tambo and Cape Town international airports for use by Fifa accredited members.

He said a total of 3 000 Fifa accredited delegates were expected for the 2010 Final Draw on Friday. A total of 2 000 of them are already in the country, while the remaining are expected to land in the country in the next two days.

Gigaba said visa exemptions were only made available to Fifa accredited delegates in possession of letters of accreditation from the world football body.

However, delegates are pre-screened by the National Intelligence Agency before being granted with a visa exemption. A dedicated unit was also available to Fifa for the fast tracking of all visa applications.

The department has also established an Immigration Response Unit which will be deployed during periods of congestion at the ports of entry with a 15 to 30 minutes response time.

Gigaba said the department has already made significant contribution towards ensuring that the Final Draw is a success.

“The draw event is the first step towards ensuring our state of readiness for 2010. In this regard, we have implemented the 24-hour operations centre to monitor and unlock logjams.

“We have also implemented an extensive communications campaign abroad and we are working with travel agencies, airlines and embassies to ensure the smooth passage of Fifa accredited delegates including the media,” he said. 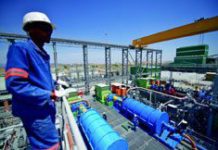